There were scenes in Belgium and Turkey over the weekend, with a pair of Socceroos finding the back of the net in action-packed contests!

Watch our wrap of Trent Sainsbury's brace and Awer Mabil's debut goal in the player above, or read on to check out this week's full Aussies Abroad report.

You can also listen to our new Aussies Abroad podcast in the player below, or subscribe and download it on Spotify, Apple Podcasts & Google Play.

The latest weekend of football saw crucial goals scored from many of our Socceroos, including an injury-time strike from Awer Mabil and a brace by Trent Sainsbury in Belgium.

Joel King also showcased how highly he has been rated by new club Odensk BK, with the defender given a starting debut overnight.

Meanwhile, Japanese football returned, with the J.Leagues kicking off the competition's 30th campaign.

Tom Rogic was involved in another Celtic victory overnight as the Hoops overcame the challenge of Dundee FC, emerging victorious 3-2 and keeping their spot at the top of the Scottish Premiership.

It seems that Ange Postecoglou had the plan of resting many of his attacking stars before their crucial European tie on Thursday night. The Aussie midfielder was one of those rested, having started the Dundee match on the bench, before being introduced in the 67th minute.

All eyes turn to Norway mid-week, where Rogic and his team must overturn a two-goal deficit against Bodø/Glimt, to qualify for the UEFA Conference League Round of 16.

Riley McGree and Middlesbrough will be looking for an immediate bounce-back midweek after a tough 2-1 defeat away at Bristol City. The midfielder began the match as a substitute, before being introduced after 53 minutes, with Boro desperately searching for an equaliser.

The loss has seen McGree's new team slip back out of the Championship's promotion play-off places. Middlesbrough will need to switch their focus quickly however, with another league match against West Bromwich Albion coming up on Tuesday evening.

Jackson Irvine's push for Bundesliga promotion has gotten a little bit harder to achieve, with his side FC St Pauli dropping out of the promotion places after a 3-0 loss at home to Hannover 96.

Irvine started the game as a substitute for the Hamburg outfit, before being brought on in the 61st minute, in order to help regain control of the contest.

Dynamo Dresden drew 1-1 at home to Heidenheim over the weekend, with Socceroos forward Brandon Borrello introduced at half time.

Trent Sainsbury delivered a man-of-the-match performance as KV Kortrijk broke their winless run in emphatic fashion, defeating rivals Zulte Waregem 5-0 at home. The Belgian side had been struggling for goal-scorers, but few would have predicted centre-back Sainsbury would be the catalyst for such a dominant attacking display, with the Socceroo scoring the side's first two goals.

Sainsbury opened his account in the 17th minute with a trademark header guided right past Zulte Waregam's goalkeeper. Having not learnt their lesson, the away side left the 30-year-old alone from a 44th minute corner, with Faïz Selemani providing a beautiful ball into the box for the Socceroo, who headed home for his second goal.

The defender played out a full 90 minutes and was awarded with a further clean sheet, to add to his already impressive scoring stats for the afternoon. 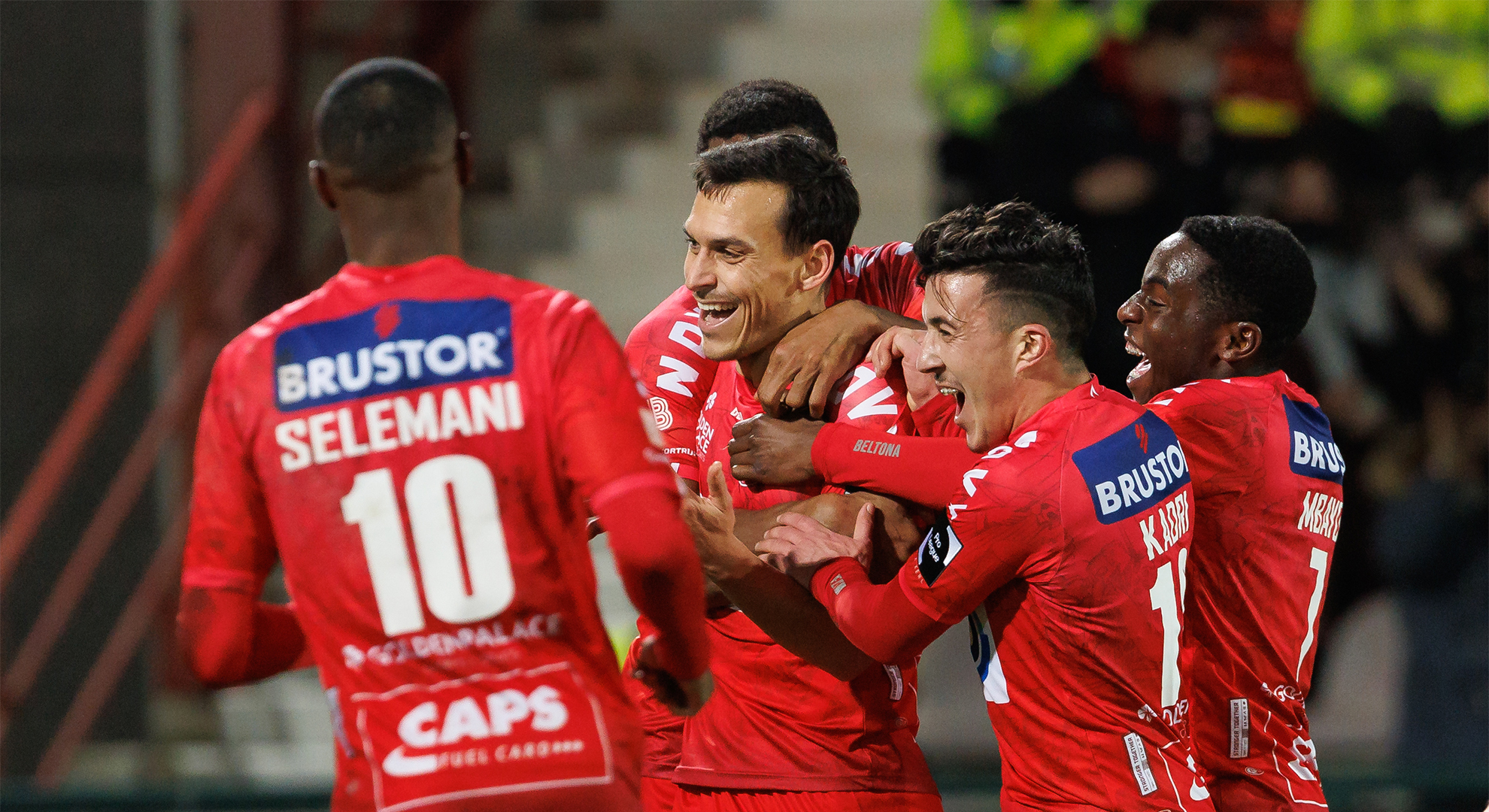 Meanwhile, James Jeggo played a full 90 minutes for club side AS Eupen once again. Unfortunately, the midfielder and his side were no match for Belgian giants Club Brugge, who took all three points in a 3-1 result.

Awer Mabil was directly involved in a Turkish Süper Lig classic, as Kasimpasa snatched a crucial point away, with their match against second-place Konyaspor finishing 4-4. Mabil started the game on the bench, later being introduced in the 71st minute with Kasimpasa behind 3-2.

After a penalty levelled the scores, it was Awer's turn to stun the home supporters, with the winger cutting inside from the left, before firing toward the near post, beating the goalkeeper for pace. Mabil's 91st minute goal sparked wild celebration and looked to have won the match, however due to a number of stoppages, the match had an extended period of injury time.

Aziz Behich performed admirably over the weekend, as his side Giresunspor were beaten 2-1 away at mid-table Kayserispor. The defender started and finished the match, as he continues to play an important role in Giresunspor's fight for survival.

The Danish Superliga has another Aussie on its books, after Joel King made his debut for Odensk BK, in a 2-0 defeat to capital side FC København. Despite the 21-year-old defender having only just joined the club, he was still entrusted to a starting spot for his debut, playing up until the 87th minute, before being substituted as OB looked to flood the field with attackers.

In Italy, Fran Karacic's Brescia kept their hopes of automatic promotion alive, with a 90th minute equaliser helping snatch a point at home to Frosinone. Karacic was brought on to the field in the 64th minute, after starting the match as a substitute.

The J.Leagues returned to action over the weekend, with a large audience tuning to watch Asia's fastest growing domestic competition, after an off-season where the competition gained a large amount of recognition for its exports to Europe.

Mitchell Duke was amongst those involved over the weekend, as the striker steered his side Fagiano Okayama toward a convincing opening day victory at home to Ventforet Kofu. Having started as a substitute, the 31-year-old was then brought on at the 62nd minute, with Okayama requiring the forward's experience, to help close out the match.

In Saudi Arabia, Martin Boyle was unable to break the deadlock for Al-Faisaly, despite playing out the full 90 minutes in his side's 0-0 draw at home to mid-table club Al Raed. Boyle will be hoping to find the net again for his new club when they return to action midweek, for an away match at Al Fateh.

Melbourne City's Socceroo front-line impressed once again, with Jamie Maclaren and Mathew Leckie both on the scoresheet, as City ran out 3-0 winners at home to Newcastle Jets. Despite not being able to nab a goal for himself, Marco Tilio put in a man-of-the-match performance on the wing, assisting two and providing the spark up-front for the Cityzens.

Rhyan Grant played a full 90 minutes for Sydney FC, providing an assist for the Sky Blues' only goal as they drew 1-1 with Wellington Phoenix at Leichardt Oval.

Craig Goodwin became Adelaide United's second all-time top scorer on Sunday, finding the back of the net during the Reds' disappointing 4-1 defeat to Macarthur FC.