Another standout campaign has seen Sam Kerr ranked fourth-highest women's footballer in FIFA 22 while a number of Commonwealth Bank Matildas stars have had their ratings boosted ahead of FIFA 22’s release on October 1.

Commonwealth Bank Matildas and Chelsea superstar Sam Kerr has been recognised for her fine form with a rating of 91 in the latest edition of FIFA which is set to be released on October 1.

She comes in behind Vivianne Miedema, Lucy Bronze and Wendie Renard who all rated 92 and ahead of Amandine Henry, Dzsenifer Marozsan, Caroline Hansen, Tobin Heath, Megan Rapinoe and Alex Morgan who all rated 90.

She played a big role in the Blues claiming back-to-back FA Women’s Super League title, as well as helping Chelsea to a first final appearance in the UEFA Women's Champions League. 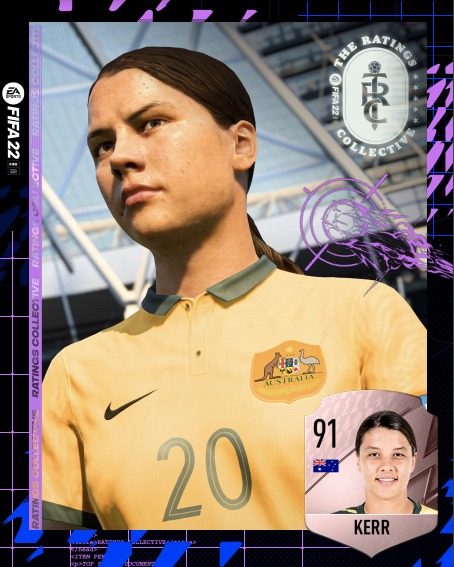 Caitlin Foord, Steph Catley and Ellie Carpenter are the next best Aussie women with both players given an 82 rating for FIFA 22.

Olympique Lyonnais Féminin defender Carpenter has climbed from 77 to an 82 rating, the biggest rating boost. Her standout year for club and country saw her awarded both the PFA Women's Footballer and Young Women's Footballer of the Year.

MORE: Being back in camp is a home away from home for Micah

READ: Logarzo and McCormick relishing opportunity to be back in camp

Foord and Catley both move up in ratings, with Foord's red hot form for Arsenal bumping her up by two points, while Catley moves up by one. Arsenal teammate Lydia Williams moves down one point, with injury keeping her out of the Gunner's season for a short time.

Elise Kellond-Knight dropped down from 83 to an 80 rating after a difficult campaign which has seen her sidelined with an ACL and other injuries.

Hayley Raso moves up from 78 to 79, while Manchester City teammate Alanna Kennedy remains on 78.

Some new faces make their FIFA 22 debut, with Kyra Cooney-Cross, Mary Fowler and Amy Harrison with rankings of 72, 69 and 69 respectively.