NAIDOC WEEK 2022: How the CommBank Matildas got up, stood up and showed up in Tokyo

With NAIDOC Week 2022 commencing yesterday, proud Anaiwan woman, Kyah Simon and the CommBank Matildas shared one of the most famous moments they made a decision to Get Up! Stand Up! Show Up!

Many fans would remember the CommBank Matildas' match against New Zealand at the Tokyo 2020 Olympic Games. The Green and Gold reigned victorious in their opening game, defeating the Football Ferns 2-1 but what was more memorable, was the strong stance the Australians made before the match, linking arms in solidarity and proudly unfurling the Aboriginal Flag.

Kyah Simon explained how the discussion came about after she and Noongar woman, Lydia Williams, had a heart-to-heart with their CommBank Matildas teammates.

"We were at the Olympics and the conversation around Black Lives Matter and where we all stood on it, came up. Sammy [Sam Kerr] said to myself and Lydia [Williams], 'As our Indigenous players within the team, how do you feel about it?', she explained. 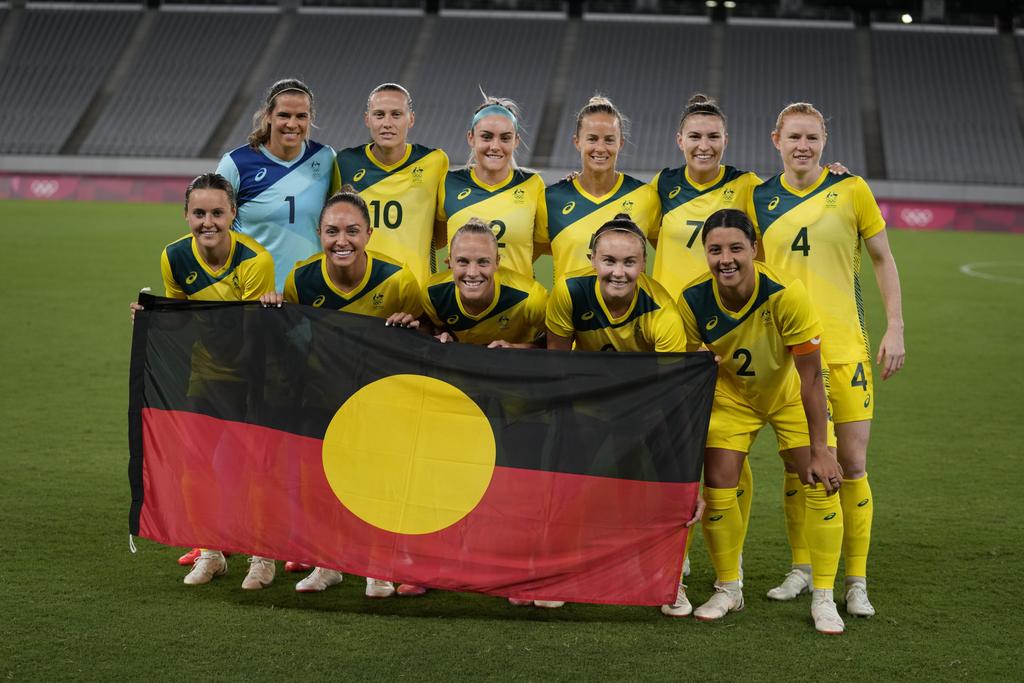 "We were in full support of Black Lives Matter, but as a team, we wanted to do something a little bit closer to home and address some of the issues that we have in our own backyard. With Lydia and I both being so passionate and proud of our Aboriginal heritage, we thought, how can we show solidarity for our culture and for Aboriginal and Torres Strait Islander Heritage within Australia?

Simon explained that their ideas were met with overwhelming encouragement from her teammates.

"The whole team was in full support and it just made me really proud to be a part of the Matildas, knowing that a lot of the direction and the desire to do something for our culture and heritage, came from the majority of the team, who are non-Indigenous."

Though it may have seemed a welcome statement, there were many considerations the team needed to discuss, specifically around Rule 50 of the Olympic Charter which prohibits any kind of demonstration, political, religious or racial propaganda.

The CommBank Matildas knew that by displaying the flag, they risked potentially being sent home from the Games, but Simon said that the reward outweighed any potential disciplinary action.

"There was definitely a mindset of, the risk was worth the reward," she said.

"We knew there would be some parameters around it. We didn't really know what we were going to encounter after displaying the Aboriginal Flag, but I think something that was so close to our hearts, and something we are so passionate about, was worth what the risk potentially was.

"The reward for taking that stance and displaying the Aboriginal Flag at the Olympic Games, where the world saw, will have an everlasting impact and effect on everyone watching, especially Indigenous people across Australia."

She was right, it made an impact, with many media outlets reporting on the stance and viewers sharing it was an emotional and favourite moment of the Games.

"It kind of caught everyone off guard and by surprise, but I think it was a great surprise. I definitely got a lot of feedback from people who said seeing the flag was the highlight of the whole Games," she said.

"A lot of people told me they had tears in their eyes, so to know the impact it had and the way it touched so many hearts, is so special to me and why it was so important to do."

It was a full-circle moment for Simon, who was herself inspired to pursue her dreams by Cathy Freeman, a legendary Kuku Yalanji woman, who united the nation on the Olympic stage when she won gold at the Sydney 2000 Olympic Games.

"The first and last time I'd witnessed the Aboriginal Flag at the Olympic Games, was when Cathy Freeman carried it. That was also the moment I was inspired to compete in the Games, so it was actually a full-circle moment. It was incredible.

When asked about the message the team was hoping to send by their stance, Simon said it was a message of pride, bravery and equality.

"The main message we wanted to send was that we're not afraid to be proud of who we are. We're proud of our heritage and our culture. We have the longest-standing culture in history," she said. "It was just a huge moment of solidarity, where we wanted to stand up against racism and inequality within our sport and in the wider community as well."

In honour of this year's NAIDOC Week theme, Simon wants to encourage the footballing community to come together through education, visibility and inclusivity.

"I think the theme, Get Up! Show Up! Stand Up, encapsulates what we can do as a wider football community in terms of just acknowledging our Indigenous practices and that education piece across the board.

"I'd love to see an Indigenous round in the A-Leagues and an Indigenous jersey would be great, that would be huge for me to wear throughout my time with the Matildas.

"If we can educate people a little bit more about what our culture is, they can embrace it and willingly want to learn and share more about it. Living in Australia, we have a very multicultural country, so embracing our history, which is a difficult history to go back on, is important so we can then find a way to move forward together."