A much-loved teammate, mentor and coach, Barbieri has witnessed a timeline of ups and downs and highs and lows since making her professional debut on February 7, 1997, for ITC Victoria in the Women's National Soccer League.

Much has changed since she stepped onto the pitch as a 16-year-old. Still playing today, the 'keeper is able to speak from a unique place of experience.

Like most players of this era, Bubs began playing football as an eight-year-old competing in boys' teams as there were no girls' teams available. She actually began her career as a midfielder until injury prompted the switch to goalkeeper and she didn't look back. 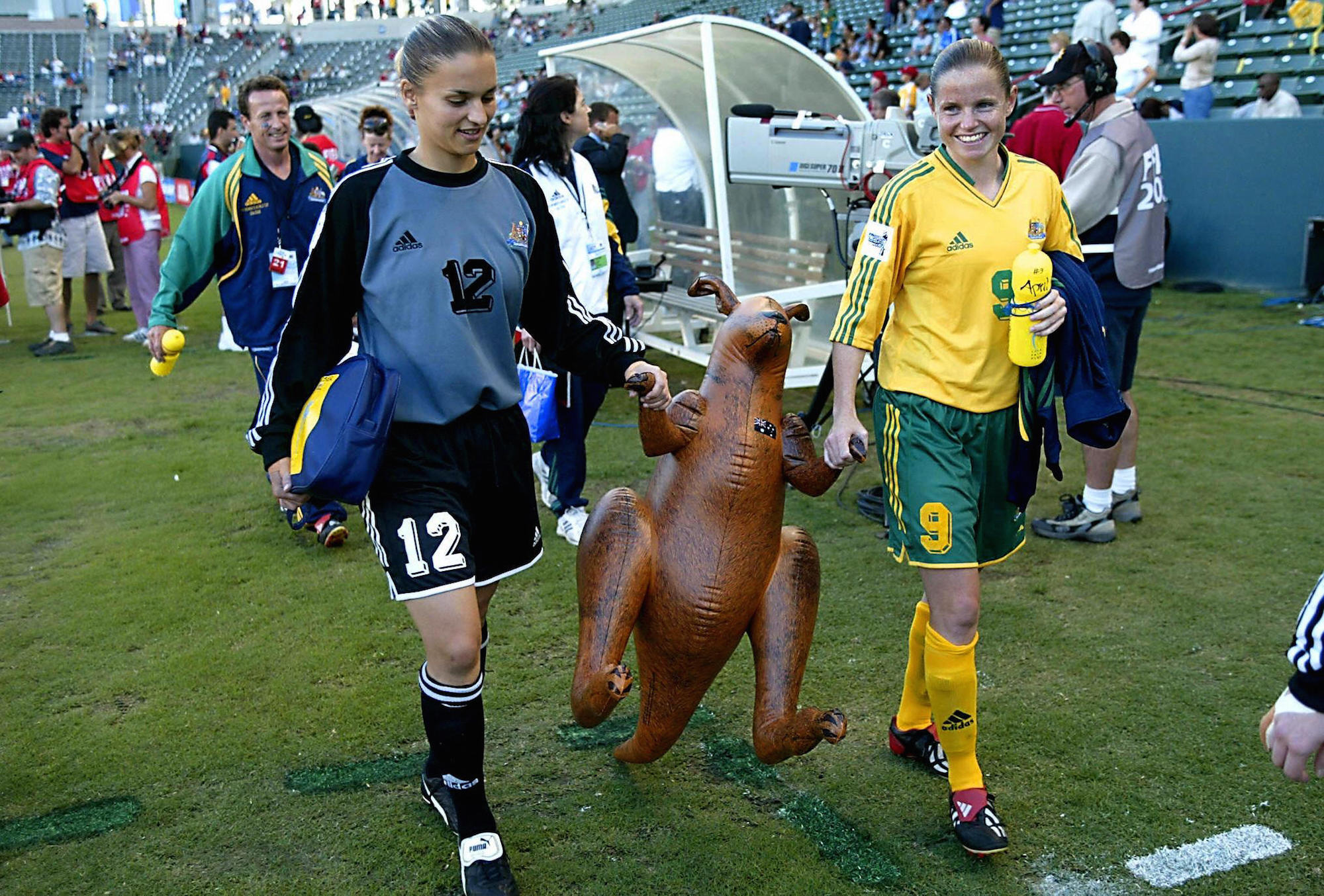 Playing professionally for a quarter of a century wasn't always the plan for Barbieri, in fact, it wasn't even considered a possibility when she began her career as an elite footballer 25 years ago.

"I always wanted to play for as long as I could," the multiple W-League goalkeeper of the year recipient said.

"Over the years, a lot of people who had retired and walked away from the game would say, you're a long time retired. They also said, you'll know when you want to retire, because you don't have the drive, you don't enjoy the challenge, you're not getting nervous anymore or you're not learning anything, but these are all things that I haven't felt yet.

"I'm just taking it one year at a time and because we play so little football. I think it has helped with the longevity of my career, in terms of my body," Barbieri continued.

She says she believes the secret to remaining in love with the game all comes down to gratitude, looking at the bigger picture and sharing her learnings with others.

"I'm so grateful for the opportunity to play and I've always just wanted to instil that part of it into everybody else.

"As footballers, we're very determined, we're very success-driven, but I like to remind people that we are human beings as well. You can do magnificent things on the pitch, but at the end of the day, how we treat each other as human beings is what makes us important in the lives of others. 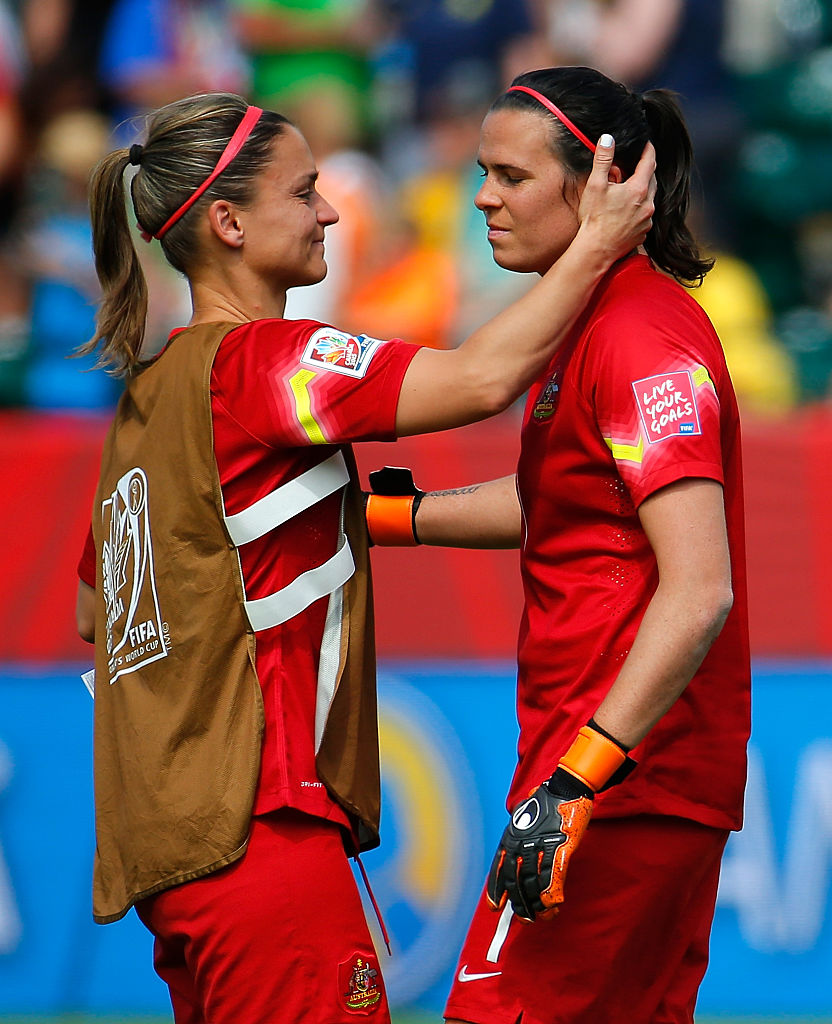 "When I think about all the times I've said something to another teammate, I hope that they've taken that as 'Bubs wants me to be better,' because it's about growing not only as footballers but as people."

In September of 2002, Barbieri made her national team debut with the Matildas in a 1-0 win over Canada. She calls this one of her proudest moments not only because it was her debut, but because she was able to keep a clean sheet under the immense pressure of her first senior national team call-up.

The following year she played at her first of four FIFA Women's World Cups.

In 2008-2009, she played in the inaugural W-League season, where she won the league's top goalkeeping honours with Melbourne Victory.

Her skills between the sticks and natural leadership ability led to her promotion to team captain, where under her guidance, the Matildas won the 2010 AFC Women's Asian Cup.

"My most cherished football moment is the 2010 Asian Cup. Winning that final and the prestige of playing in Asia really cements home how far we went in that tournament," the Melbourne City 'keeper explained. 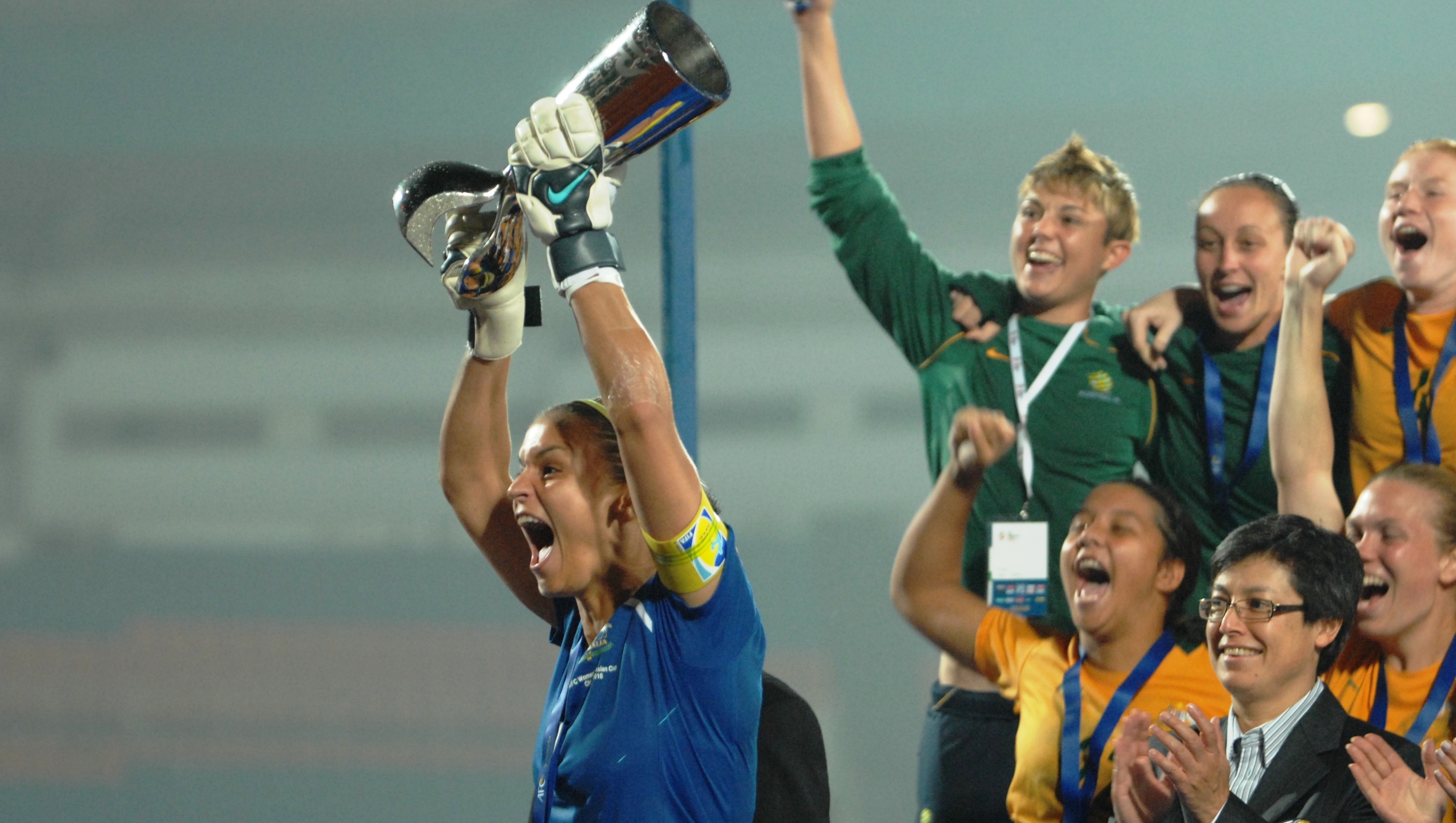 "We made the final four years beforehand, but we weren't ready for the win yet. It's one of my most cherished moments because it will always be stamped in history."

These days, it's becoming more common to see women return to elite sport after giving birth. The Matildas' Katrina Gorry is one such example, but in 2013 when Barbieri gave birth to her first child, the perception was that you had to choose between motherhood and a career as a professional athlete.

Between recovering from a c-section and dealing with the perception of others, Barbieri became an inadvertent trailblazer, but the transition was not without its difficulties.

"It was more (of a challenge) than I anticipated, in terms of the perception around females and female bodies, what you can or can't accomplish as a mother," the Athens 2004 Olympian said.

"Physically, I think we're underestimated by a lot of people and it always just seemed to be too much trouble or there weren't enough resources."

Barbieri said that motherhood was seen as a hindrance not only to a professional sporting career but to any career in general.

"It wasn't just an athlete thing, it was a workforce thing. A lot of mothers that I spoke to outside of the game were saying the same thing. They'd had a child and then people's perception of the way they could complete their job changed, " she shared.

"In actual fact, you learn more about yourself and what you're capable of as a mother. Everything that you previously did goes out the window and you just go above and beyond what you thought you were capable of."

Times have begun to change since then, with motherhood being celebrated and even commercialised.

"It's really humbling. It's fantastic to see that Mini (Katrina Gorry) has been supported so wholeheartedly and there's been a real effort to endorse her in terms of sponsors and utilising the corporate aspect because mothers spend money as well," Barbieri explained.

"So when they have that ability to earn outside of a football wage and having the CBA and maternity leave, I'm really proud.

"I did it tough, and I had to sell memorabilia and things to continue playing, but I just love the fact someone like Mini doesn't have to fight so hard."

Barbieri retired from national team duties in 2015 with 86 caps to her name and still holds the record for the most clean sheets for a Matildas' goalkeeper.

At 42 years of age, Bubs is the oldest player in the A-League Women's competition in a country where seeing a female player take the pitch post-early 30s is an anomaly. 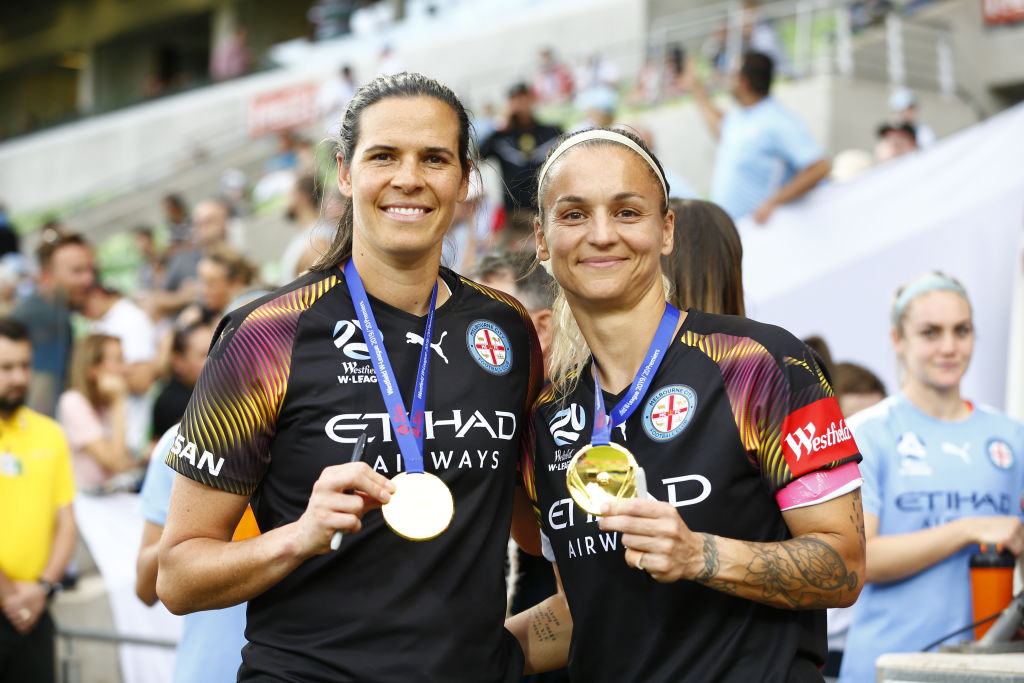 Although it's been seen in the USWNT and NWSL with players like Carli Lloyd still playing when she was 39 years of age, Megan Rapinoe at 36 and Brazil's recently retired Formiga at 43, there has been an unwritten knowing that women in Australia generally do not play football far into their 30s.

Players like Barbieri and recent Matildas' call-up, 36-year-old Aivi Luik, are changing this perception and Barbieri couldn't be happier.

"It's really important [knowing that I've helped change that perception.

"I don't want girls to think of themselves as having a full stop at any age. I don't want them to think if they haven't made the national team as a 16-year-old, it's not possible. Yes, it can happen, but it's not the norm. You may not find your best football until your mid-20s," she said.

She also explained how the various opportunities for women in football these days, are what has made it possible to continue your career for as long as your body and mind will let you.

"As long as you've got a great attitude and you're wanting to learn, there are so many more opportunities.

"Back in the day, if you didn't play in the W-League, you couldn't really go anywhere else, but now you can literally play anywhere in the world. Second or third tier. 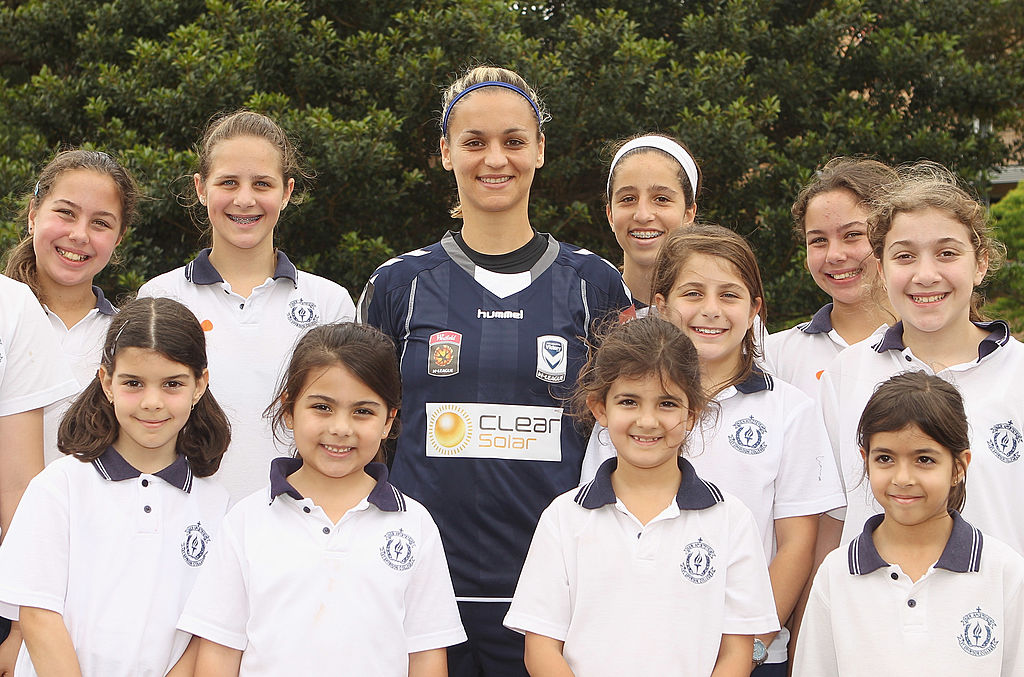 "It's not like for the men, where they can go and play in England, all the way down to the fourth tier and still make a professional wage, but we're starting to get more of those opportunities now where the lower leagues have the resources and you can go over there and ply your trade.

"It's the perception of what you think you can and can't do. As long as you're willing to grow in the tough moments, you are the only one who can limit yourself."

Although she says it's hard to choose, the most positive change Barbieri has seen throughout her career is how women are now received by generations who didn't know that women played football when she first started playing.

"I understand that younger generations are going to know us because of social media but I gauge the growth of women's football off the old chap in the elevator that, says, 'Hey, you play for Melbourne city, you must be in the A-League,' and they get your sport right.

Knowing that that has gone across a few barriers. They say, 'Oh, my granddaughter plays,' or 'My daughter was quite good at soccer when she was in school,' rather them saying, 'Oh, I didn't know girls played soccer.'

"Having the TV deals with Paramount and that growth of streaming and being able to be seen is really important because otherwise, we would have to do that ourselves.

"I remember writing countless emails asking why we're not in the newsletter and why we're not on that website and things you don't have to fight for anymore. It's really amazing." 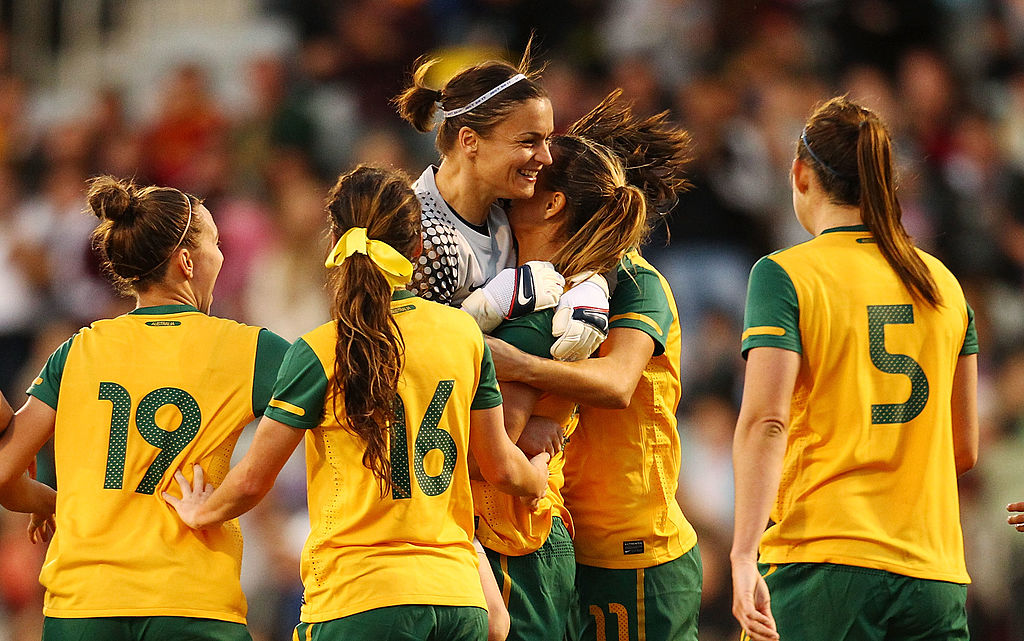 As for what's to come for the next 25 years, Bubs wants to see equal opportunities for women in football, across all areas.

"My greatest hope is that everybody who loves the game has an opportunity to be involved in the game at whatever level they choose to be involved at, without any restrictions or barriers to their participation such as motherhood, location or money," she said.

"Equality of pay is really important, because when you look at the elite men and women and the pay for the coaches, many of the coaches who earn a wage that is decent, can then afford the licences.

"I want women to be able to earn equal pay so that they can gain the same opportunities as males. I want to see, rather than, jobs for the boys or jobs for people that they know, giving people opportunities based on what they can do rather than what their name is," Barbieri, who was the first Victorian woman to undertake her A-Licence coaching accreditation, continued.

"I did a speech at the army once and the commander, the general all those who were senior, were champions for women. They said something notable to me which was, when I employ a female who has less experience than a male, yes, I am taking a risk, but I'm understanding that this female has not had the same experience, because they were never given access to the opportunities that the male had.

"We want the best people in the jobs for a time, but we also need to be given those jobs because we are female, to catch up. Otherwise, that gap doesn't get smaller. It just continues to grow."