Macarthur FC: All you need to know about the A-League newcomers ahead of debut season

The A-League will welcome a 12th club in the 2020/21 Season with Macarthur FC joining the competition.

Head coach Ante Milicic is assembling a squad with a nice mix of youth, experience and quality which will be keen to hit the ground running when the new campaign gets underway.

There is plenty of buzz around the new A-League franchise and there’s been plenty of news surrounding Macarthur in the build-up to the upcoming season.

Here’s all you need to know about Macarthur FC.

Who has been signed so far?

Adam Federici, goalkeeper, new signing
An experienced gloveman, who has featured 16 times for the Socceroos, has also agreed to a two-year deal at Macarthur after leaving English side Stoke City.

Mark Milligan, midfielder, new signing
A huge coup for the new club with the ex-Socceroos skipper – who has gone to four FIFA World Cups – agreeing to play for Macarthur after leaving English outfit Southend United.

Matt Derbyshire, forward, new signing
The former England U-21 striker and Premier League player, Derbyshire has joined the A-League expansion side on a two-year deal.

Aleksandar Susnjar, defender, new signing
The towering Perth-born defender has worked with Milicic as part of the Olyroos squad in 2018, while he will get his first taste of the A-League following stints in Romanian Lega 1 with Gaz Metan Medias, Busan IPark in the K League, Lithuanian side Ekranas Panevezys and Czech first tier outfit FK Mlada Boleslav.

Ivan Franjic, defender, new signing
The title-winning defender re-united with Milicic, who he has worked with in the national team set-up during both the 2014 World Cup in Brazil and the 2015 AFC Asian Cup. Franjic has amassed 241 top league matches and 20 caps for the Socceroos.

Nick Suman, goalkeeper, new signing
The youngster will battle Federici for the no.1 jersey, having played in the A-League with Western Sydney Wanderers, making five appearances.

Denis Genreau, midfielder, new signing
Milicic has great faith in the French-born playmaker, securing him to a three-year deal with the club. Genreau made his A-League debut at just 17 with Melbourne City.

Milislav Popovic, forward, new signing
A local junior, the former Olyroos forward links with Macarthur after stints in Italy, Germany, and Austria, most notably with FC Cologne in the Bundesliga and German second tier side Eintracht Braunschweig.

Jake Hollman, midfielder, new signing
A young Socceroo, the teenage midfielder joins the Bulls after strong displays in the Foxtel Y-League and NPL with Sydney FC.

Who’s on the coaching staff?

The man charged with taking Macarthur FC into their maiden A-League campaign is the vastly experienced Ante Milicic, who was appointed in May, 2019.

This is the first head coaching job in the A-League for the former Westfield Matildas boss and Socceroos assistant and he has assembled a strong coaching team around him.

Ivan Jolic, who worked with Milicic at the Westfield Matildas, will serve as his assistant, while former New Zealand international goalkeeper Glen Moss will work with the club’s shot-stoppers.

What are the club colours?

The club confirmed their official name – Macarthur FC – and club colours back on May 16 last year at a function at Campbelltown Catholic Club.

The colours - black, gold and white - were chosen to represent the diverse cultures of the area.

"Like the club, [they] are authentically fun, tribal, proud, hardworking and inclusive," the club said at the time.

"Ochre is included to represent one of the traditional colours for the local Dharawal Aboriginal people on whose land the Macarthur region sits.

What kit will they wear?

The A-League newcomers inaugural strip was designed in Italy with consultation from club apparel partner Macron.

The predominantly white home shirt features a touch of black and ochre around the collar and sleeves.

An embossed bull head features on the front lower third of the jersey. While it also features a synthetic rubber patch that Macron have designed and moulded into the club crest and signature colours black, white, and ochre, that will be emblazoned atop of each jersey.

The back-neck of the shirt features the club’s emblem surrounded by black and white bars, further paying homage to the colours synonymous with sport in the area. 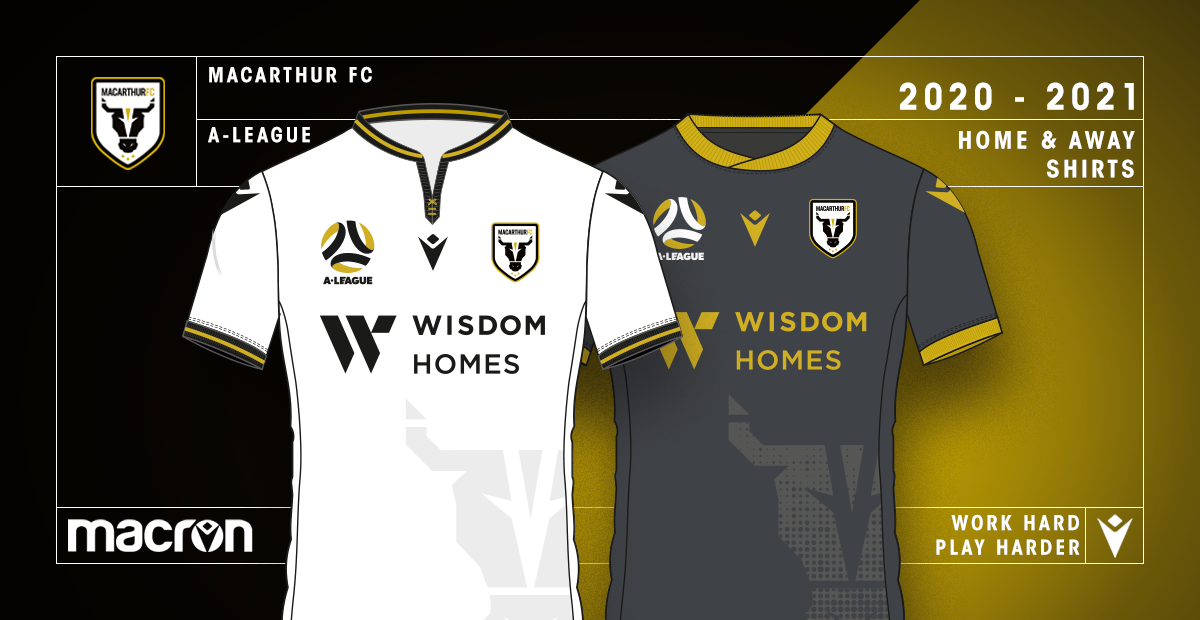 What is the club logo?

The club’s logo contains four key elements, encompassing a bull – which is synonymous with the region – the local football associations and the five local councils.

The three stars [on the logo] represent the A-League team, the affiliated National Premier League teams and community football. 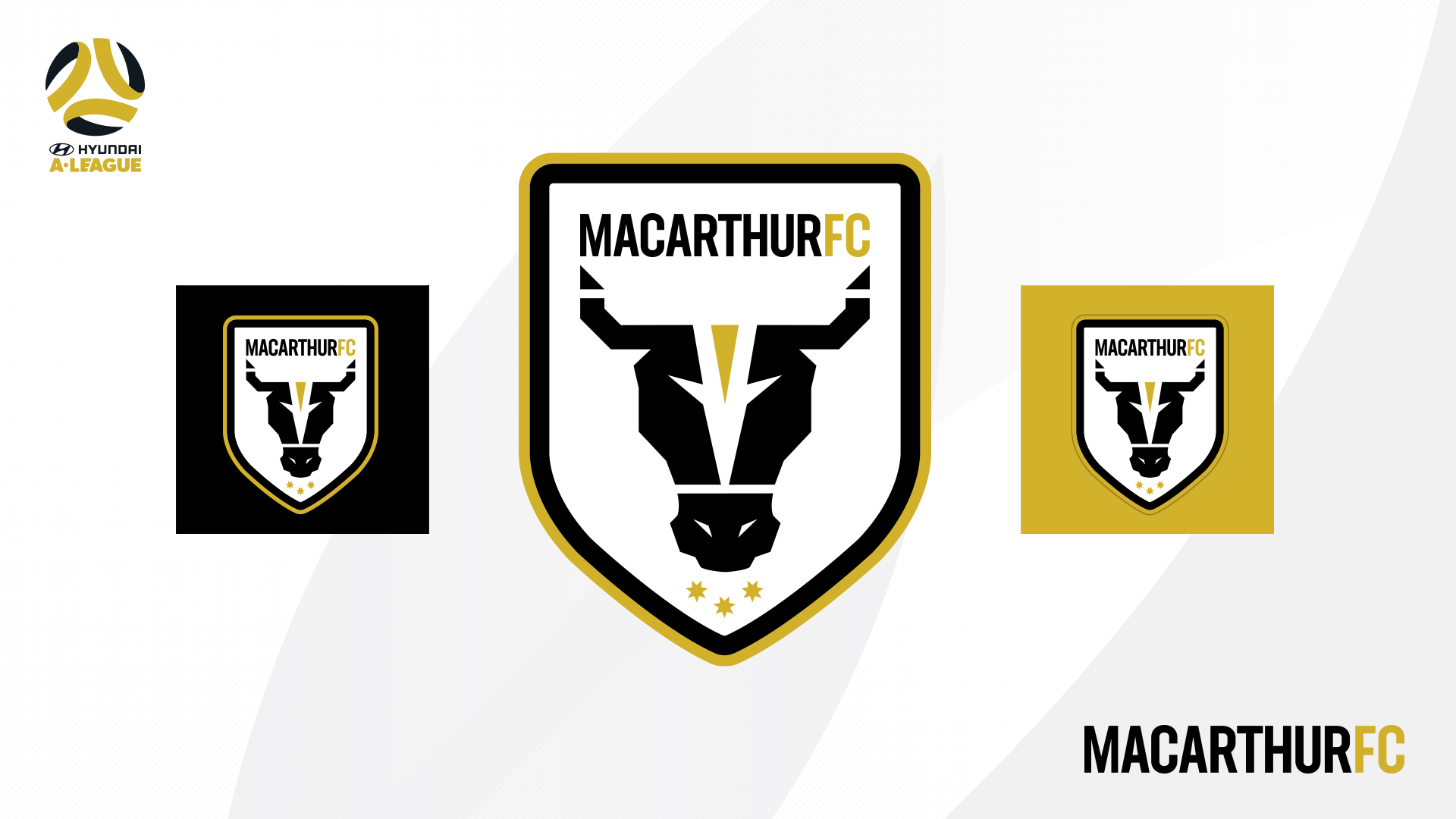 Where will Macarthur play?

The new club’s home ground will be at Campbelltown Stadium, with its training headquarters to be based at a new Centre of Excellence which is currently under construction.

The club are currently using Fairfield Show ground as their training base. 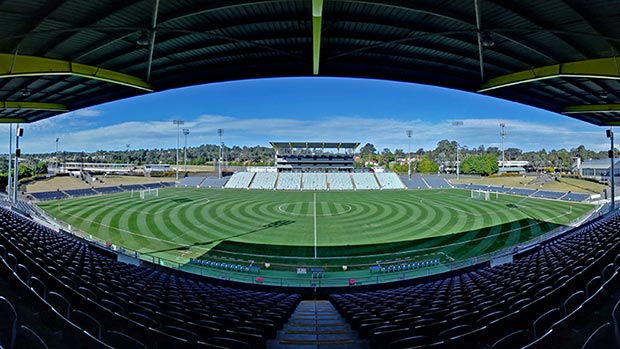