Mid 2000-era Matilda, Emma Wirkus, looks back on her career representing Australia with much fondness. The beautiful game brought her friendship, support and a football family that has been with her through many ups and downs, no more evidently than during her recent breast cancer diagnosis.

The South Australian goalkeeper  played most of her domestic career for Adelaide United and later, Perth Glory in the W-League and received her first call up to a national team camp after the Athens 2004 Olympic Games, during the reign of then Matildas head coach, Tom Sermanni.

She looks back on making her international debut, a home friendly against China, as one of her greatest memories and achievements.

“Being called up to represent your country is phenomenal, it’s unreal,” the mother of two said.

“There’s a real sense of pride and honour that comes with it and you just feel lucky.

“There certainly weren’t the fantastic crowds that the Matildas get these days, but nothing takes away from being able to pull on the green and gold jersey and represent Australia.”

Wirkus played for the national team alongside the likes of Cheryl Salisbury, Heather Garriock, Kate Gill, Di Alagich and Alicia Ferguson, to name a few.

She also witnessed teenagers like Clare Polkinghorne coming through the ranks. 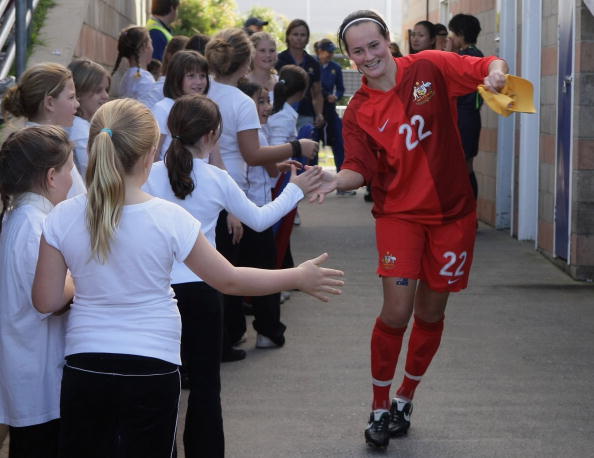 Since hanging up her professional boots over a decade ago, Wirkus hasn’t strayed far from the game, still playing socially and coaching her children’s football teams. It was actually on the pitch just three months ago, where Wirkus received the devastating news that she had breast cancer.

Her diagnosis in March of this year, came as a shock. She admitted that as a woman who was still quite young, active and healthy, she didn’t consider herself someone who was at risk of the disease.

“I think everyone is very aware of breast cancer, yet still, I’d just turned 39 and I didn't think it would be me, I really didn't,” she shared.

“There's a lot of publicity around getting mammograms and doing breast checks when you turn 50 and older, but it always played in my mind as something that only impacted older women.

“You look at the risk factors for cancer and they’re things like being overweight, inactive, those that don't breastfeed or those who have been on the pill or hormone-based contraceptives. I don't fit any of them,” she continued. 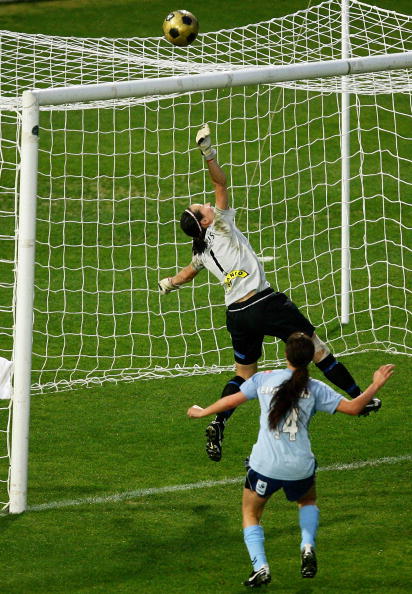 For Wirkus, it wasn’t a medical intervention or even a self-scanning method that prompted her to get herself checked, it was actually her youngest child.

“I'd love to be able to say that I found my breast cancer because I had some sort of regimented breast check routine, because it’s drummed into you everywhere, but bottom line is, I just got lucky,” she said.

“My six-year-old came into bed one morning for a cuddle and she was mucking around, tickling and poking me and when I was getting her to stop, I brushed past my breast and felt a lump there.

“Initially I thought nothing of it, because normally I’m terrible with those types of things, but I realised it was really noticeable, so thought I’d better get it checked.

“I booked in with my doctor the following day, she did a breast exam and told me I needed to see a specialist straight away,” Wirkus continued.

“I was really lucky that she took it very seriously and I say that because as you start to build your networks with other cancer patients, you realise that often, young women aren’t taken seriously when they find breast lumps.

“The number of stories I’ve heard where women have found a lump, gone to their GP and were told they were too young for it to be breast cancer, is astounding. They really had to push and go back 6-12 months later, by which time of course, the cancer had grown and spread.” 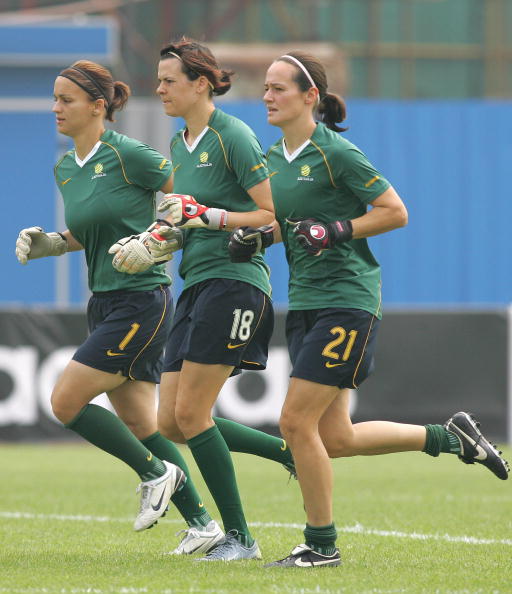 Learning first-hand that cancer does not discriminate, Wirkus wants to encourage all women, regardless of age or fitness, to be vigilant around their health and realise that it’s never too early to start checking your breasts and having regular mammograms.

“I went to see the specialist the next day where they did a mammogram, ultrasound and biopsy and by looking at the images they were able to tell me that it was a tumour, but they believed it was benign and said they’d give me a call in a couple of days.

“Setting up for football training was when I got that call. I was actually running a coaching session for my eight-year-old’s U9’s team and was literally putting down the cones when my surgeon called me.

“I’m an optimist, but I should have read the writing on the wall when the surgeon asked me if it was a good time to have a chat, but when she told me, and I was floored,” she continued.

“I shed a tear and my son came up to me while I was squatted down on football field.

“The only time he’d ever seen me upset was when we lost our dog six months prior, so he ran back to my daughter and they both began to worry that something had happened to our new puppy.

“I didn’t want to tell them at first, I wanted to wait until I’d had all of the testing and scans done and knew exactly what it all meant.”

Once she had all the information to hand, Wirkus and her partner, Summer, explained her diagnosis to the children.

“Once we had that information, we sat down as a family and explained that mum has this thing called cancer, which means there are cells in my body that aren’t growing the way we want them to, so because of that we’re going to cut them out.

“I told them it involved some hospital stays and medicine and the kids were initially like, ‘okay no worries,’ my daughter even named the tumour, Rosie.”

Once Wirkus started receiving treatment, it was harder to keep the gravity of her diagnosis from her children.

“When chemo hits, you feel pretty rotten. You get sick days where you’re really tired, some days you can’t even get out of bed so as time has gone on, it’s taken its toll on them and I now get questions from my six-year-old every week asking if I’m going to die,” Wirkus shared.

“I think she knows I’m not going to die, but she just needs to hear it all the time, especially when you’re having bad days and sick days, the kids just need reassurance that you’re going to be around. 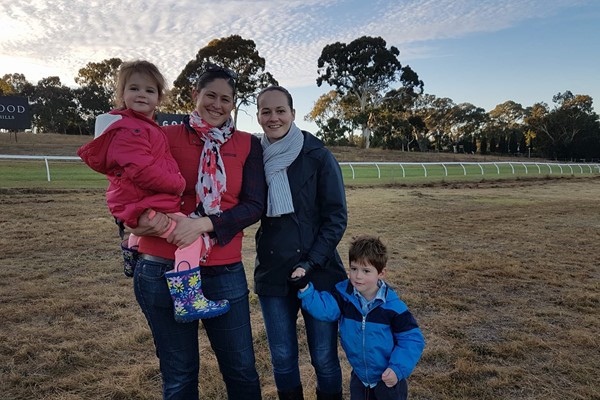 “They ask questions like, ‘mum what did you do to get cancer?’ and say, ‘I don’t want you to be sick anymore,’ and that’s the toughest part as parent.

“Being an athlete, the physical stuff, the surgeries, we’re all used to that and it’s okay, but the hardest part is not being able to take the impact of that away from your children,” an emotional Wirkus continued.

“I want to talk about the kids because as a mother, that’s the part that breaks me and as parents we so often put ourselves second and do everything for our kids.

“We don’t take our health seriously because there are too many distractions in life and we get busy and caught up, but if I think back, catching the cancer early is what saved me.

“It breaks me even now to have these conversations with my kids and see the impact that cancer has had on them, so I can’t even imagine what it would’ve been like to have those conversations if I hadn’t found it early.

“This whole experience has taught me that putting myself first, is the difference between having those two conversations.”

Wirkus says that the skills she learned as a footballer, transferred to the way she handled the news of her diagnosis.

“Your world just stops, it really does, but in saying that, it’s there and it’s better to know that it’s there because we can work out what to do next,” she said.

“Football is a really good grounding because as an athlete, you have to learn to really look at the things you can and can’t control and that was my initial reaction to the cancer, it was about what’s the next step, what’s the goal and the plan to tackle this thing.”

Wirkus was lucky in the sense that the cancer hadn’t spread outside of her breast tissue, but she still needed to undergo a mastectomy and five months of intense chemotherapy treatment before possibly having more surgery.

The football community prides itself on its passion, close-knit bonds and support of one another, something that has been abundantly evident to Wirkus since her diagnosis.

“One of the best things about sport is that you are able to build genuine, lifelong friendships,” she explained. “You’re part of a football family.”

“The support I’ve received through my diagnosis from the football family has been amazing.

“I don’t think you actually realise how lucky you are until you hit rock bottom and obviously being diagnosed with breast cancer was a real shock. It floored me.”

One of these friendships is with fellow shot-stopper and Matilda, Melissa Barbieri who has supported Wirkus throughout her diagnosis.

“My sister created a page where people could help out with practical things like cooking meals and dropping the kids off and Bubs (Barbieri) shared the page along with a message on social media.

“I never realised just how big the football family was until she did that,” Wirkus explained.

“After Bubs shared the post, Summer came home one day and said that an ‘Anne Holmes,’ was dropping around some frozen meals for us.

“She came over and we started chatting about football and she mentioned that her daughter had debuted for the Matildas a couple of weeks earlier and I thought, that’s just incredible and I realised her daughter was Dylan Holmes.

“It brought it home just how lucky I am to have that support and still be part of that football family even 12 years after retiring. I’m very, very grateful.”