A draw in Portugal for centurion Williams and CommBank Matildas

Newest centurion Lydia Williams and the CommBank Matildas have seen victory and a clean sheet snatched from them, after an 87th Portugal equaliser, which settled the scores at 1-1 in Estoril.

Having remained on 99 international appearances since the New Zealand friendlies in April, Australia's longest-serving international, goalkeeper Lydia Williams, was finally given the illustrious 100th cap, joining backline teammate Clare Polkinghorne in that achievement, with the defender handing off the captain's armband to her long-term teammate and friend for the Portugal clash.

Having flown to the other side of the Iberian Peninsuela for the clash, the 34-year-old and her teammates were met with less than ideal conditions in the Portuguese capital. Looking to bounce back from their first defeat to the Spaniards, the Australians were met with an intense breeze facing towards them in the first half, with the wind forcing the green and gold to play in short passages, limiting their opportunities to counterattack with speed.

Tony Gustavsson made a tactical switch midway through the first half to help wrestle back momentum, with Charlotte Grant and Courtney Nevin switched. Grant was shifted back to her preferred role at the heart of the defence, while Grant floated further wide, to utilise her link-up play in attack, from the full-back position.

The move almost proved dividends immediately, with the change unlocking the right-hand side of the attack, where Emily Gielnik broke forward through a swift counterattack, beating two Portuguese defenders, before laying the ball off to Emily Van Egmond on the outside of the box, with the midfielder tapping her strike just over the bar. 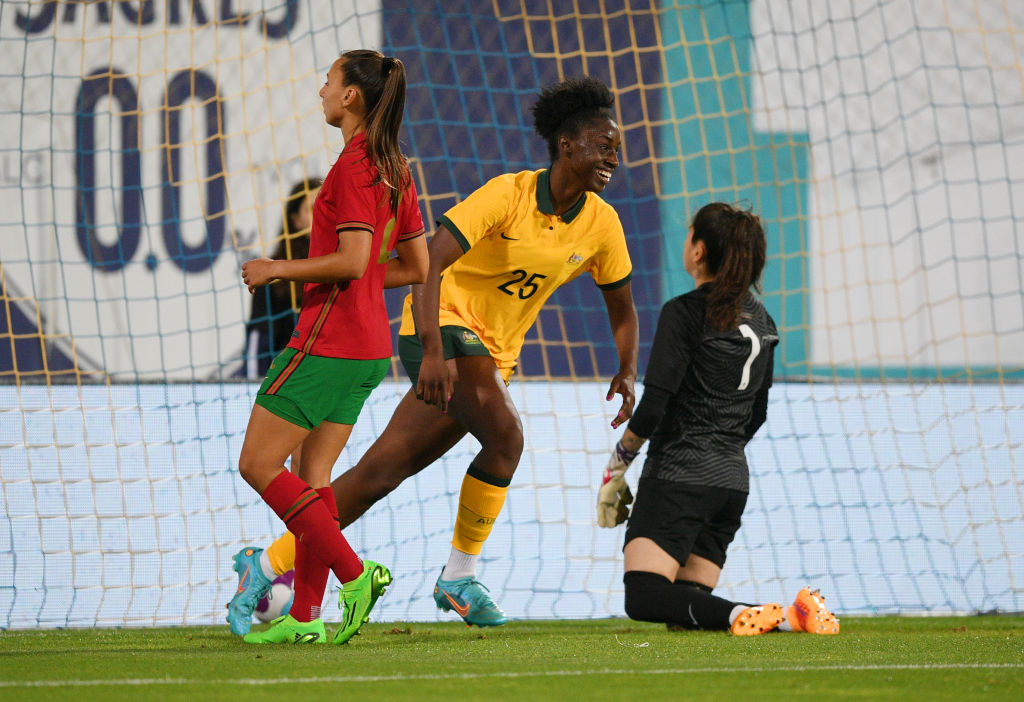 Both sides subsequently went into the sheds at half-time scoreless, rueing a multitude of missed scoring opportunities. Sensing a need for pace up-front, with the wind now in the Aussies' favour, Gustavsson decided to introduce Princess Ibini-Isei to the match.

As the second half developed, the more confident the CommBank Matildas became, having already withstood almost an hour of intense wind, facing against them, without conceding.

The speed of Ibini-Isei, Grant and Gielnik provided plenty of headaches for the home side, with the Portuguese retreating, allowing further pockets of space and time for Australia's more experienced midfielders including Van Egmond and Gorry, who had previously been limited in their involvement.

Eventually, the breakthrough arrived for the green and gold, with Princess Ibini-Isei snatching her first senior international goal after an explosive counterattack in the 73rd minute.

It was the right flank that proved pivotal again after Gielnik received a well-placed Van Egmond through-ball. The winger then outpaced her marker, before spraying a delightful low cross along with the penalty box towards Ibini-Isei, who slid herself toward the path of the ball, tapping home in a clinical manner.

Tony Gustavsson displayed his faith in the side put on the park, with only one extra substitution made in the second half, with Larissa Crummer concluding her successful return to international football, replaced by young forward Amy Sayer in the 84th minute, as the team pushed for a second goal.

However, three minutes later, the Portuguese forwards finally found their shooting spark, with striker Telma Encarnação picking up the floated cross from the right flank, swivelling her body toward goal, before nestling her strike in to the bottom-left corner.

The goal was a dagger to the heart of Williams, who had been outstanding throughout her 100th appearance, making several key saves and collections in high-pressure moments early, as the CommBank Matildas weathered the storm of attacks.

Despite Lydia Williams' immense performance between the sticks during the 1-1 stalemate, it was in fact Emily Gielnik, who was the fan-voted player of the match, after an outstanding 90-minute shift on the right-wing.

Gielnik's floated cross for Ibini-Isei's goal was undoubtedly the highlight of the side's Iberian tour, while her partnership with Charlotte Grant on the right side of attack has successfully filled the enormous hole of Ellie Carpenter, with Tony Gustavsson now given the dilemma on how to utilise his right-sided weapons during the upcoming FIFA Women's World Cup in 2023.

The CommBank Matildas will return to international action on home soil when they play Canada in September.