Westfield Matildas too good for Japan at Tournament of Nations

Two second-half goals has seen the Westfield Matildas beat Japan 2-0 on Friday morning (AEST) to boost their chances of winning the Tournament of Nations.

After a lacklustre first-half, Australia showed their class after the break with Alanna Kennedy and Sam Kerr grabbing the goals at Toyota Park in Chicago.

READ: 'Just a bit of a sore nose': Carpenter on THAT falcon

Alen Stajcic’s side must now wait to see the result in the USA v Brazil clash later on Friday to find out if they will retain their Tournament of Nations crown.

USA, currently on four points, must beat the South Americans by two goals finish at the top of the group on goal difference ahead of Australia (seven points).

Knowing they needed a multiple-goal win to boost their chances to win the tournament, Australia failed to fire in a first-half devoid of clear-cut chances.

But whatever Stajcic said at the break worked, with Kennedy firing Australia in front within two minutes of the restart with a piercing free-kick from just outside the box.

The Westfield Matildas dominated from that point one, with Kerr denied by both the post and the keeper at different stages before scoring what could be a priceless second goal of the match.

The classy striker used her pace to get to the ball just before Japan’s keeper and finished calmly into an empty net to ice the result with nine minutes left.

The Westfield Matildas will now watch the USA’s game against Brazil to discover if they are the 2018 Tournament of Nations winners. 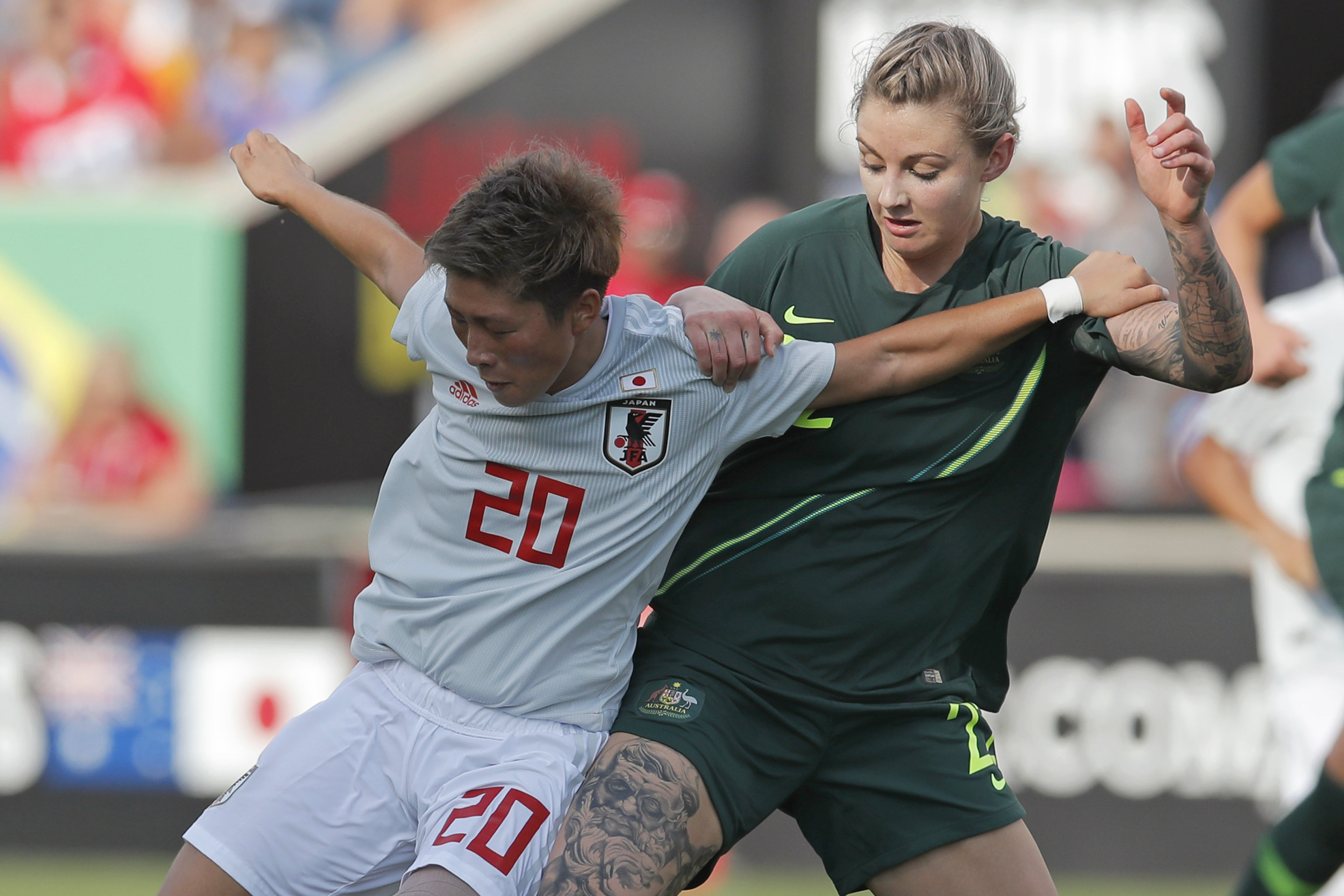 5’ JAPAN APPLIES EARLY PRESSURE: It was Japan that started on the front foot, creating the best of the early chances when Nakajima got free down the right and put in a dangerous cross across the face of goal which Raso cleverly shepherded out for a goal-kick.

17’ RASO IN THE BOOK: The Westfield Matildas right-back picked up a yellow card for a heavy tackle in the middle of the park on Japan’s Emi Nakajima.

22’ WILLIAMS KEPT ON HER TOES: Japan continued to ask the Australian defence plenty of questions, firing off a couple of shots in quick succession from just outside the box which were comfortably saved by keeper Lydia  Williams on both occasions.

26’ CARPENTER GOES CLOSE: The Westfield Matildas’ best move of the match so far, with a sweeping move down the left ending with Ellie Carpenter cutting inside and getting in a low shot that Hirao gathered with ease.

29’ DOUBLE CHANGE FOR AUSTRALIA: Looking to get more energy from his side, Westfield Matildas coach Alen Stajcic made a double change before the half-hour mark, bringing on Larissa Crummer and Emily Gielnik.

41’ GREAT CHANCE FOR AUSTRALIA: Raso’s cross from the right is punched from Hirao, but the ball falls to Gielnik who just can’t guide her effort on target with the keeper out of position.

HALF-TIME: A fairly even first-half with few clear-cut scoring chances ends goalless with all to play for as the sides head to the sheds.

47’ KENNEDY NAILS A FREE-KICK: From the edge of the area, Kennedy’s low free-kick goes through the wall, sneaking in past the keeper at the near post.

53’ WOODWORK DENIES KERR: Kyah Simon’s quick free-kick releases Gielnik, whose excellent ball finds the head of Kerr but her attempt bounces off the post and away.

55’ ALMOST ANOTHER FOR AUSTRALIA: Hayley Raso uses her blinding speed to run at the Japan defence, brushing off a defender and hitting a shot which fizzes across the face of goal.

65’ KERR DENIED AGAIN: A swift counter-attack by the Westfield Matildas ends with Chloe Logarzo’s driven cross being met by a superb header by Kerr, with Hirao at full stretch to keep the goal-bound effort out.

72’ HIRAO STOPS GIELNIK BULLET: Kerr’s flick on with her head gets Gielnik in behind and she unleashes a fierce shot from a tough angle which the keeper does well to parry over the cross bar.

81’ KERR DOUBLES THE LEAD: Simon’s through ball sees the Japan keeper come well out of her box to try and clear but Kerr beats her to it, rounding the shot-stopper and a defender before rolling the ball into an empty net.