12 months on from Australia's famous Olympic qualification match against China,  four Westfield Matildas involved in Emily van Egmond's decisive late equaliser caught up to re-live the emotions of the night from start to finish.

You watch the hilarious reactions of Kyah Simon, Chloe Logarzo, Steph Catley and van Egmond in the player above.

Alternatively, read on to gather a special insight into everything that was going through the player's minds as those dramatic 90 (+3) minutes unfolded.

Steph: "During the game, it felt like the crowd was so loud even though it wasn't the biggest crowd we've had. I just remember that everyone being so loud that game I don't know why."

Chloe: "Is this the game Hayley (Raso) broke her nose? The memories are flooding back now!" 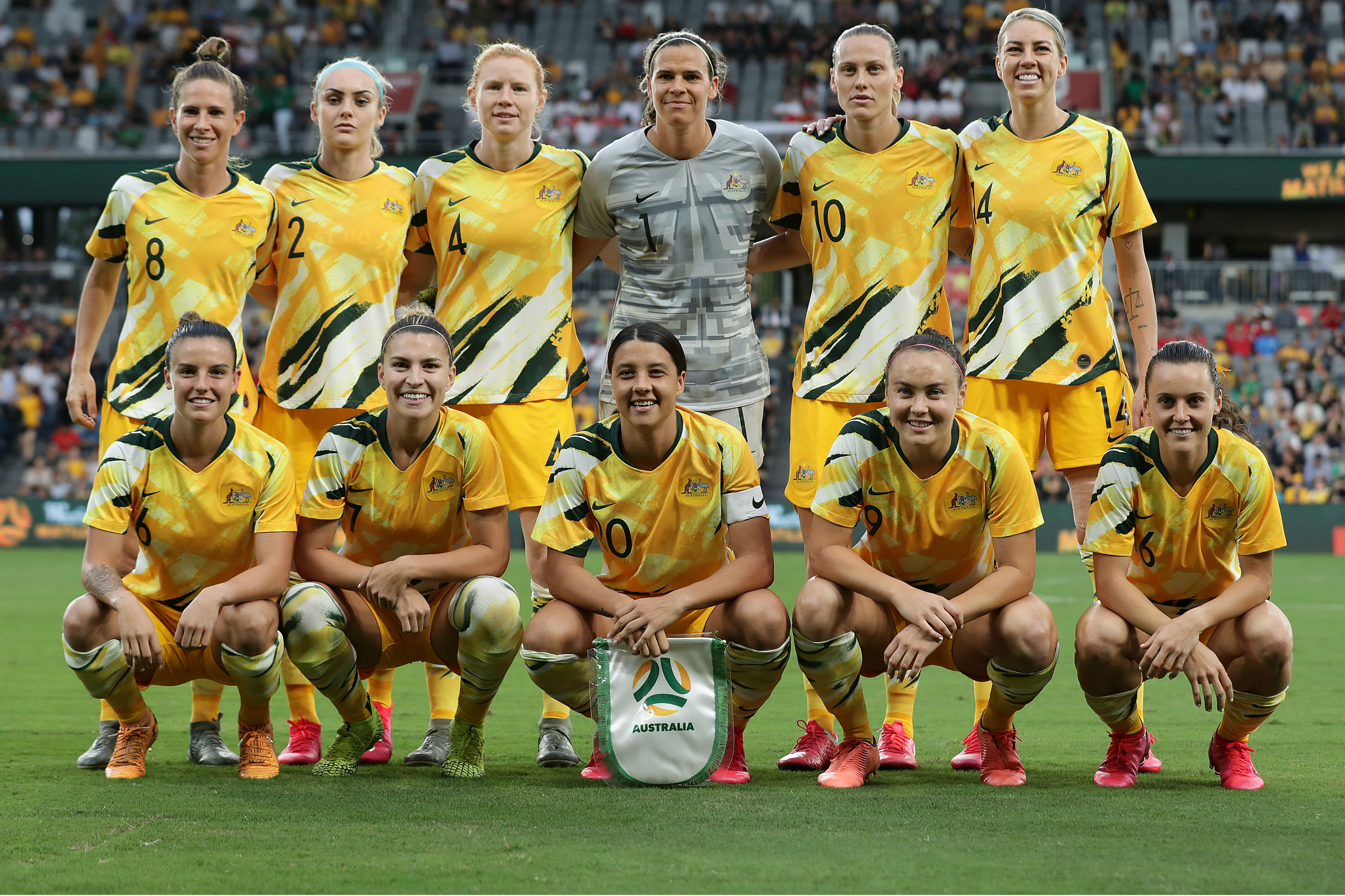 Kyah: “There was a few shaky moments definitely”

Steph: “Ellie (Carpenter) putting her body on the line there!"

Kyah: “Was this our best chance of the first half?"

34th  minute: A China corner leads to a chaotic sequence in the Australia penalty area which sees an intercepted clearance almost deflect into the back of the net.

Kyah: “We were definitely playing with fire in the first half."

Chloe: “I definitely don’t remember this many chances," the others reply, "oh, we do!"

Emily: “Lydia (Williams) probably got up and started yelling at everyone else, ‘what are you doing?"

WATCH: Katrina Gorry: I always wanted to be a mother 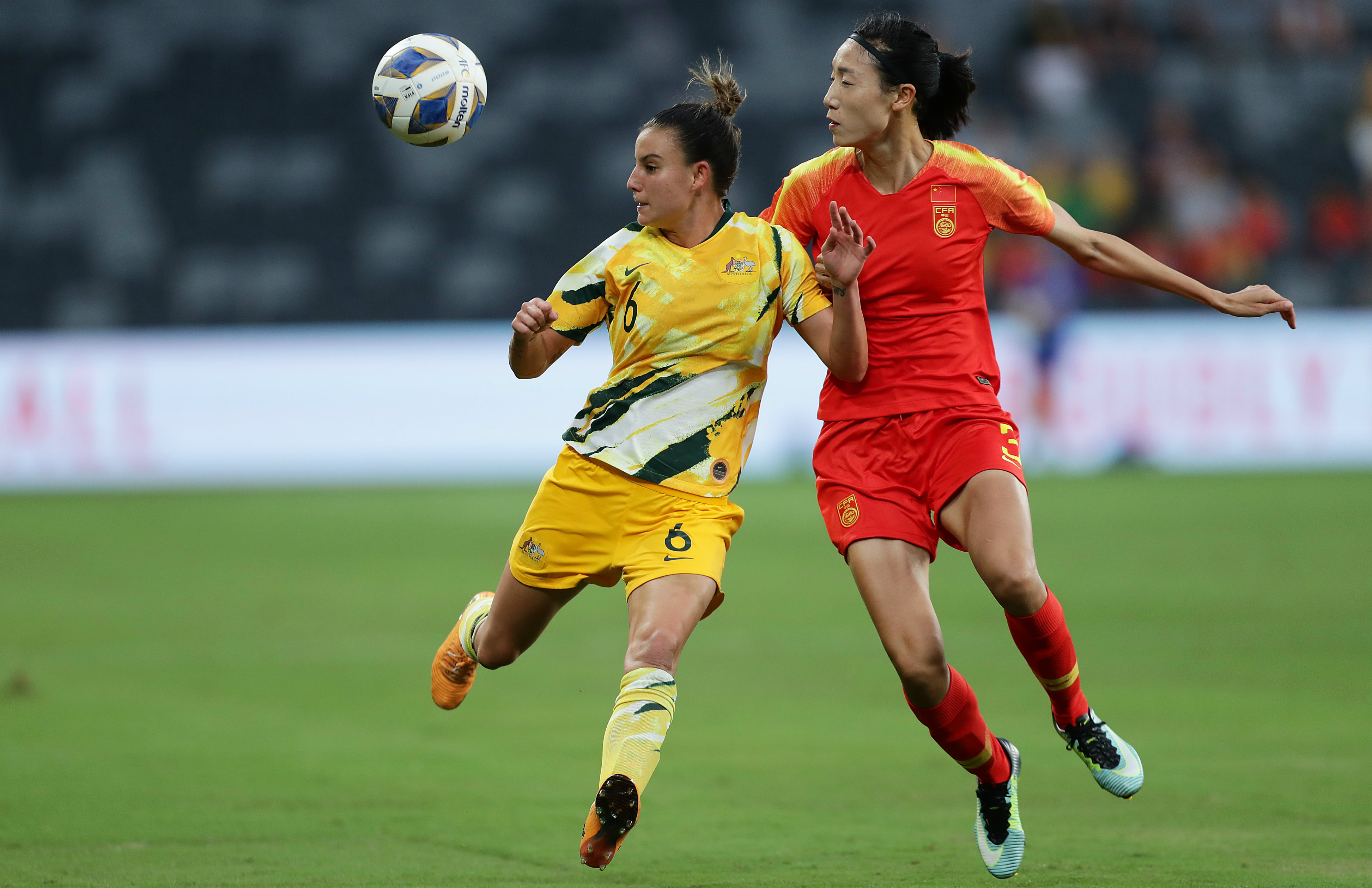 Kyah: "During the game, did you guys think about what happened if we lost?"

Steph: "Yes definitely, I knew it was going to be really really tough for us if they win this game. Going into the game we were thinking they would be so tired but they ran all day!"

Chloe "Absolutely not! I just remember this game being so hard and being so exhausted after it."

71st minute: Kyah Simon, fresh off the subsitute's bench, breaks down the right flank and delivers a pinpoint cross but Emily van Egmond and Sam Kerr are denied by some desperate China defending.

Kyah: "I think this was my first touch of the game."

Chloe: "I feel like when you (Kyah) came on it made the biggest difference. I genuinely remember you coming on and it was like a breath of fresh air because I was so tired and you brought so much energy."

Kyah: “Watching you guys in the first half, I could see the intensity and how hard you guys were fighting and I obviously couldn't wait to get out there."

78th minute: Lydia Williams makes a strong stop to deny Tang Jiali down low to her right before a vital block from Steph Catley prevents China from bundling home the rebound. Commentator Simon Hill remarks, ‘how on earth did Australia survive that one?'

Emily: "This for me is the reason why we actually got through: Steph’s block here. I remember thinking in the game ‘that was huge.’" 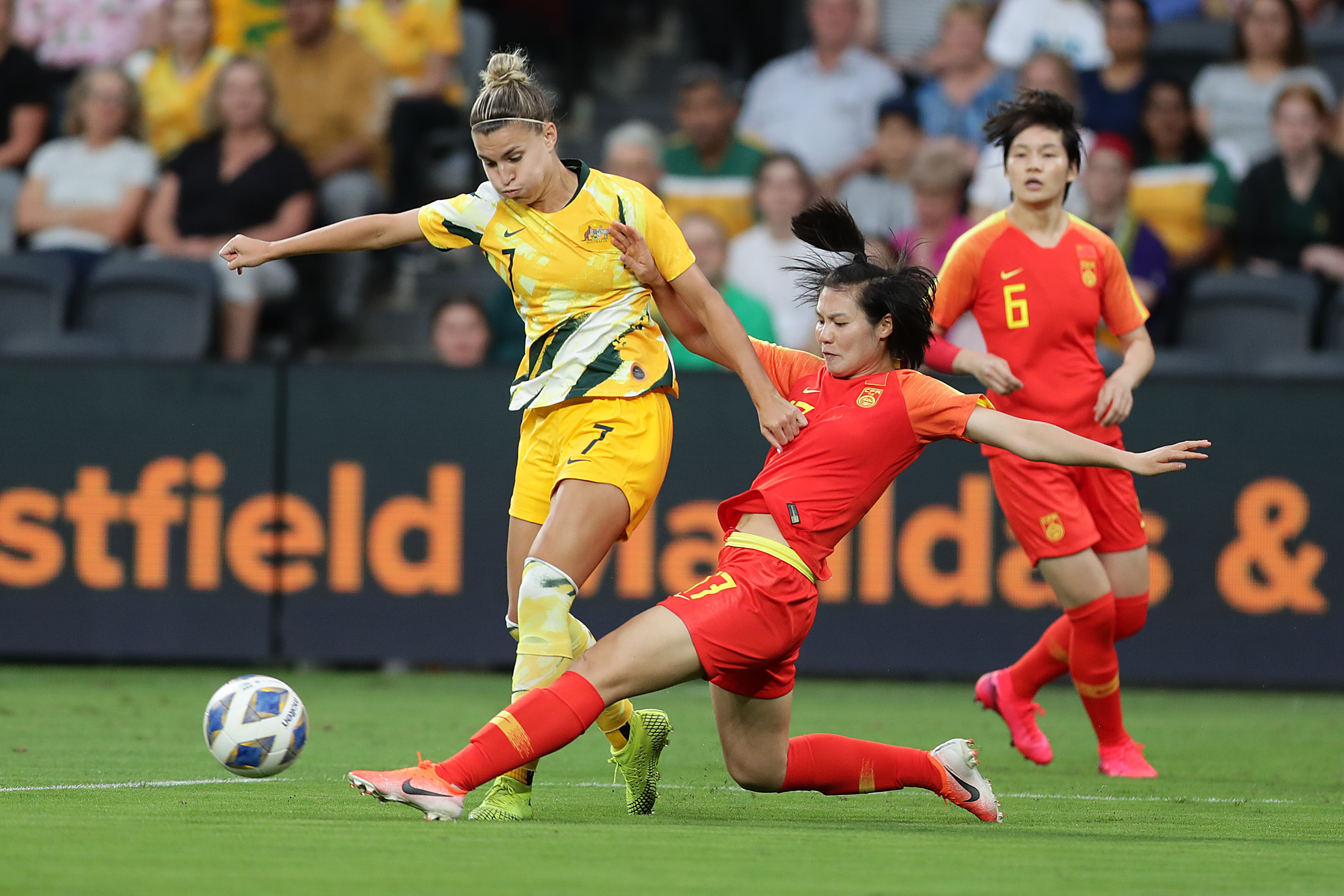 86th minute: The breakthrough. Tang Jiali strikes a dagger into Australian hearts with a powerful left-footed finish into the bottom right corner. But the reaction of our Westfield Matildas was not one of despair!

Chloe: “I don’t know about anyone else but when that goal went in I had this feeling that we still weren’t going to lose."

Kyah: “I had the same feeling as you, I just always felt like even if they scored I still believed we were going to get something out of the game. I feel like little things were going our way like I don’t think before in big games they did. I always believed ‘we were going to find something here, I don’t know what minute it would come but we will at some point..."

Steph: “When we conceded, in the moment my thoughts went to 'what if we are going to Korea', but when we kicked off, something changed. I think it (China's goal) kicked us into action, we started playing well and creating more chances and they backed off as well.

I felt as well that we were going to score, as soon as we kicked off I thought ‘we’re on here’. 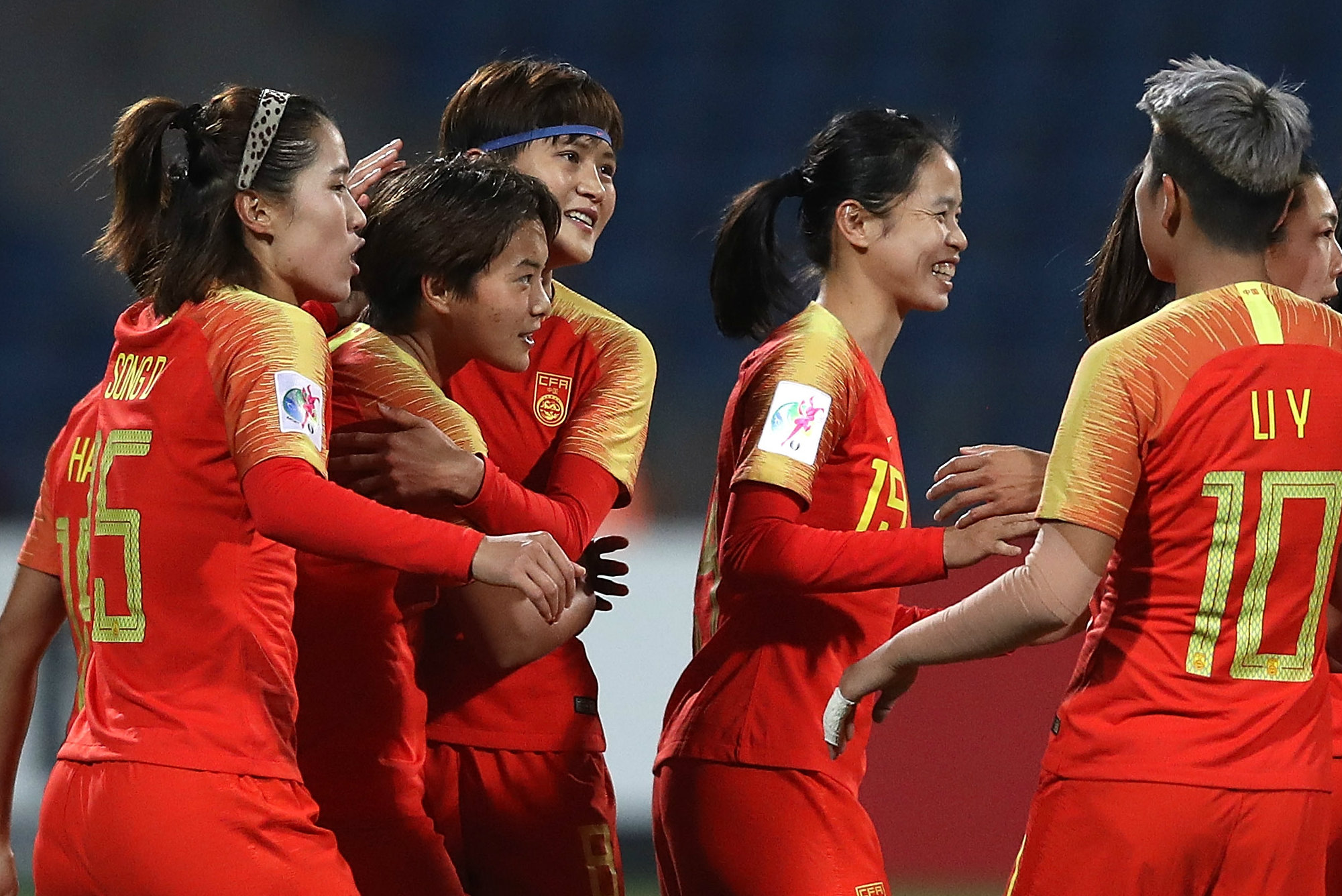 92nd minute: The famous moment. Catley drives a cross into the area which is retrieved by Logarzo, who battles with her defender and eventually rolls the ball into the path of Simon. Time seems to stand still as Simon holds up the ball amid a swarm of Chinese defenders...

Kyah: "You (Catley) get it again and we're like, 'we've just got to get numbers in the box for you' and you put it in the mixer. Chloe is fighting the world, like fighting!"

"When this was happening, I had no idea that Chloe was at Wrestlemania until I watched the replay, and I saw her like holding off the player.

Then what was going through my mind at the time was I just saw, red shirts in front of me.  I was thinking if I touch this ball, they are just going to rush me So I kind of let it roll into me waiting for something to open up. Then I see Em, in the corner of my eye.

"Then I felt like time slowed down for me in that moment because Em didn't call for the ball or give away the fact that she was there, I could just see that she was ready if I gave it to her."

Simon eventually lays the ball off to Emily van Egmond on the edge of the area... and the rest is history.

Emily: "When you (Kyah) first got it, I was like, 'she's probably gonna shoot here'.  So I was just going to see if anything would ricochet off all the red shirts.

But then like when you started to let the ball roll more towards you and I was like, 'actually, she's looking for a pass.' So then when I saw that,  I just re-adjusted a couple of yards just to be able to hit it sweetly."

Kyah: "Then I gave a little toe poke and she just hit it so sweetly and when I sort the ball go in the back of the neck it was just so exciting.  I don't know if you guys remember how loud the crowd sounded, it honestly sounded like those 50,000 people in this stadium I couldn’t believe it!"

Steph: "I knew as you hit it that it was going in. It was just one of those ones that you can tell straight away as soon as it came in. We've had some really good moments with our team but this, something about it was so epic." 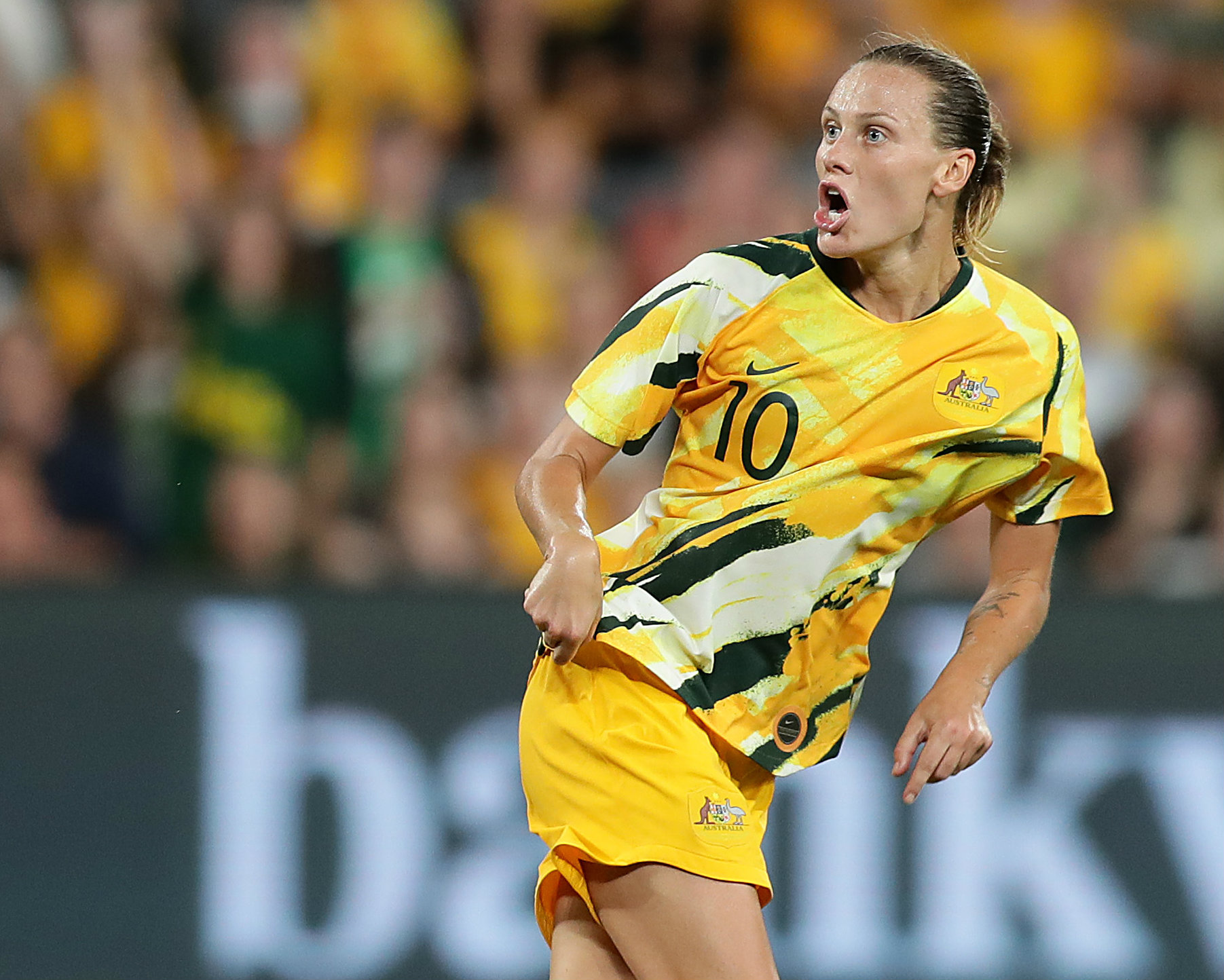 Chloe: "Whenever I see this all I can picture is when everyone piled on Em and I was maybe one of the last people to like jump on, you're (Emily) at the bottom of the pile and I've never seen anyone in my whole entire life so petrified! You're in there like ‘get off, get off!"

Emily: "I couldn’t breathe! I’ve scored, that’s great; I'm happy but then everyone was on me and I started to get really claustrophobic and freaked out.

Kyah: "When you look and see how we all celebrate, like we all jump onto them and within two seconds everyone gets up as quick as they can, it's the funniest thing!" 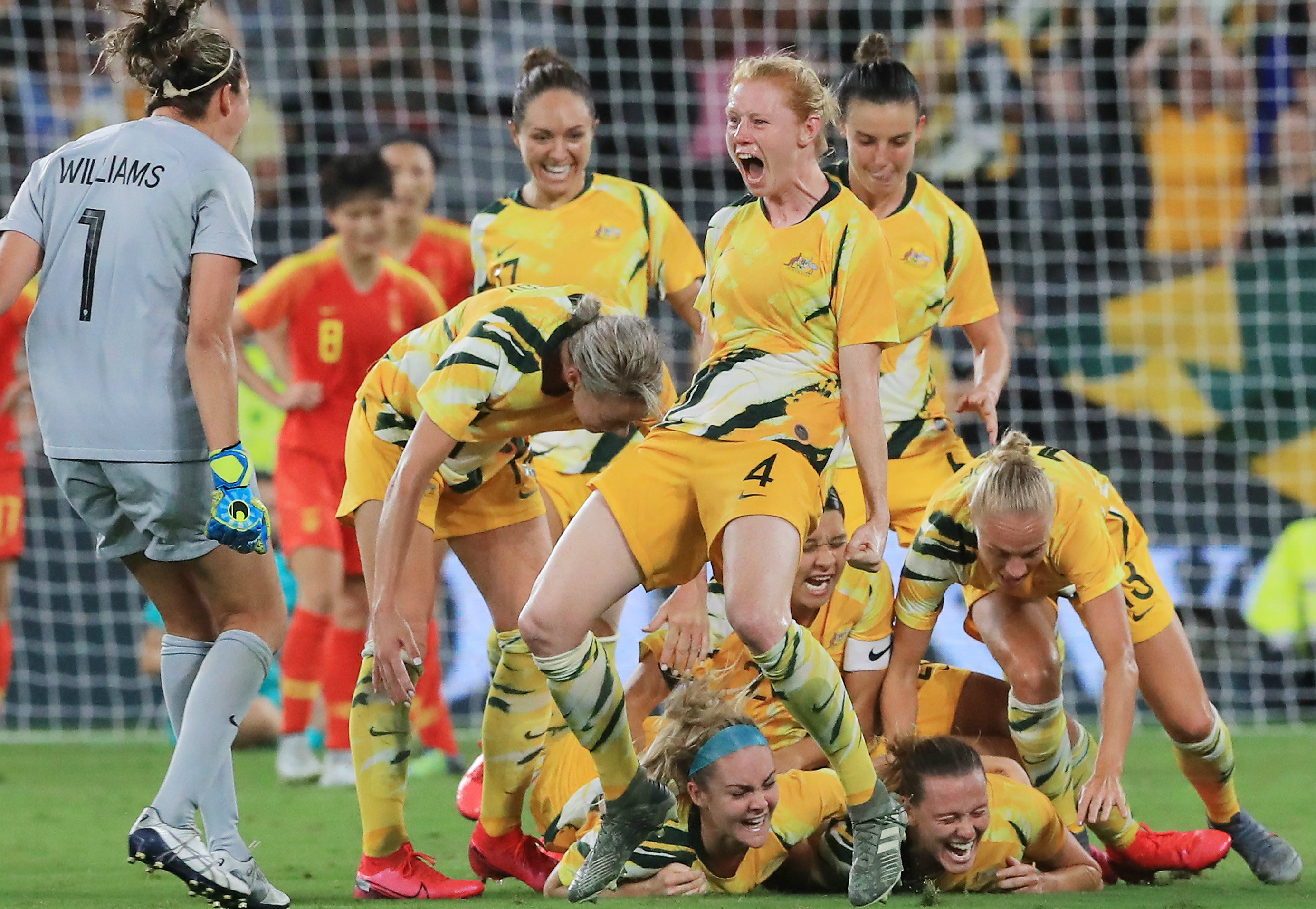 Full time: The final whistle sparks scenes of jubilation throughout the stadium as the Westfield Matildas secure top spot of their Olympic Qualification group and advance to a two-legged playoff against Vietnam for a spot at the 2020 Tokyo Olympics Women's Football Tournament.

In the weeks that followed, Australia would sure up qualification with a comfortable 7-1 aggregate victory.

Kyah: "I feel like in so many games, we've been like in the pressure cooker before and some results have gone our way but some have not. We were using the energy in the stadium in our favour and just that feeling that something was going to come.

Then the way it came like with that strike, it was one of the best moments I feel that we've experienced as a team. With our Olympic dream on the line, it was pretty incredible. It still gives me goosebumps.

"It's crazy to think that that was so long ago and what's happened between now and then. But if that's the last feeling and memory that we have together as a team or one of them, it makes me even more excited to get back together and to be continuing training together and playing games together leading into the Olympics. We can't wait."

You can watch the full Matildas React episode in the player above. Click here to read an enthralling insight into the perspectives of commentator Simon Hill, Team Manager Vito Basile and Matildas Active supporter Bekki Spratford.