Australia will play their last match of a memorable Tokyo Olympics campaign against the United States, with a first-ever Olympic medal up for grabs.

A side desperate for redemption

The women's final is traditionally played at a different time of day for each Olympic Games, so our North American rivals get priority viewing times back home.

However, they didn't account for the United States being defeated by neighbours, Canada in a semi-final, with the bronze medal match being played in Australia's prime-time slot of 6 pm (AEST) (4 pm AWST), while the American supporters will have to set their alarm clocks and stock up on coffee, for a 1 am West Coast and 4 am East Coast start.

Losing in any knockout semi-final is devastating, for a world champion side and number 1 rank, to be beaten by perhaps their greatest rivals, Canada, was a nightmare.  Veteran star Megan Rapinoe even went as far to say after the game, "Obviously we never want to lose to Canada. I don't think I've ever lost to Canada, so it's a bitter one."

Despite a questionable penalty decision, Canada showed the blueprint to beating the United States is through dogged defending and waiting for your chance to capitalise, which they did, winning the semi-final 1-0.

The Matildas must be ready for a world champion outfit, motivated to redeem themselves and their high footballing reputation across the world. Australia matched it with the Americans in their group stage match and have shown they can compete with any side at these Games, that same belief is required if they are to leave Japan with their first-ever Olympic medal. 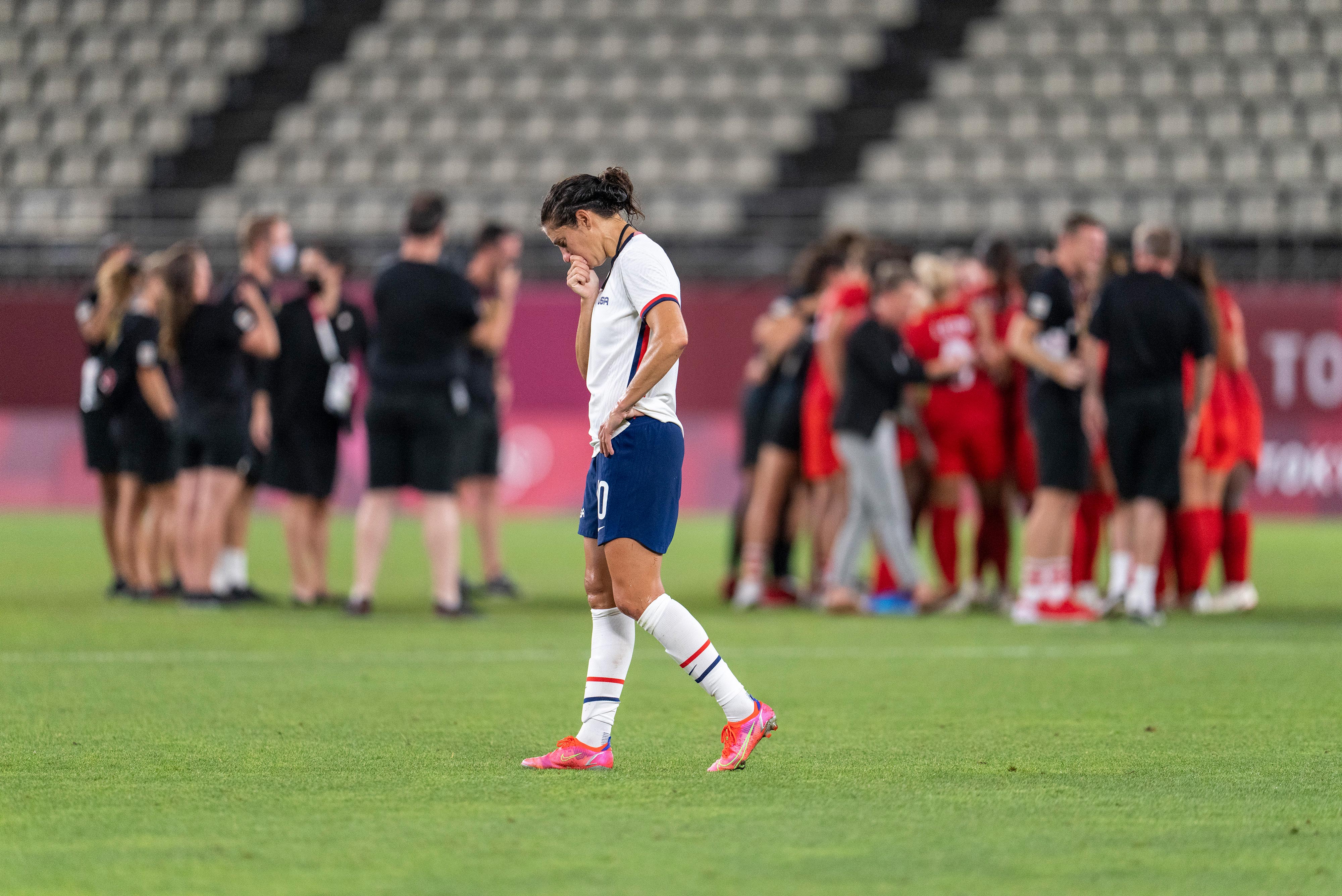 What you need to know about their squad

With a side of established stars and world cup winners, it is easy to admire the star-power our North American rivals possess. Whether it's a front-line of Alex Morgan and Megan Rapinoe, or midfielder Sam Mewis, the Americans will offer plenty of avenues in which to threaten the Matildas.

For a tournament that condensed six matches into two weeks, injuries for both Australia and the United States have been minimal.

Ironically, the one American player injured for the bronze medal match, is the only member that could play every match without the worry of fitness issues, being star goalkeeper Alyssa Naeher, who injured her knee in the semi-final.

Under coach Vlatko Andonovski, the United States traditionally set up in a 4-3-3 formation, a strategy that traditionally favours teams that like to play short passes around their opponents to progress up the field.

An interesting match-up for Thursday's match is Australia's 18-year-old midfielder Mary Fowler and 39-year-old veteran Carli Lloyd. A fact for trivia lovers, Tokyo will possibly be Lloyd's last major tournament, with the American having been in the national team set-up since 2003, the same year Mary Fowler was born.

When watching all of the United States matches over this Tokyo Olympics, one thing becomes clear, they only enjoy games when things go their way. Whether it be a stubborn Canada, a dominant Swedish side or an Australian outfit that couldn't be penetrated, the traditionally dominant Americans are finding it difficult to overwhelm sides that take the fight to them.

One thing all Matildas fans know, regardless of decisions or moments going against the team, their attitude of 'never say die' always rings true. Australia will need to bring the same belief and high-tempo football that they showed against Sweden, hopefully disrupting the rhythm of the United States.

What are the strengths within the United States? A side that pioneers women's football development, consecutive women's world cup winners and currently having a feature film written about them, possesses many strengths.

Eight of USA's starting 11 from the 2019 World Cup Final against the Netherlands started in their semi-final against Canada, with two other starters coming off the bench as the United States chased the game. Coach Andonovski will have drilled into his side all week, the importance of regaining their pride with a bronze medal. It's the job of our Matildas, to deny them of that medal and create history for themselves.