NAIDOC WEEK 2021: Jada Whyman and how Country heals her

This year’s theme for NAIDOC Week, ‘Heal Country,’ is one of special significance to Wiradjuri and Yorta Yorta woman, Jada Whyman, with her passion for healing Country coming from the way in which Country has healed her.

The Future Matilda has spent her fair share of time sidelined due to injury, in fact, of the last couple of years, Whyman has spent 14 months out of action due to a knee and shoulder injury.

“When I initially did my knee, I was actually coming back from rehabbing it and had just started playing again,” Whyman said.

“I was at the Wanderers at the time, and I had just been brought in for the Matildas for their upcoming game against Chile, here in Sydney.

“Everything looked to be going up, I was getting back on the field, my form was good and then during one of the trial matches I did a pass, my knee gave way and I couldn’t even bend it,” she explained.

“It hit me harder than I thought, the Matildas weren't able to bring me in and I wasn’t able to play with the Wanderers either, so they gave me the okay to go back home to Wagga.”

“Going back home, really helped clear my mind. I think I needed a bit of time away from football,” Whyman shared.

“Having so much time contributed to rehab, it felt like a chore to just play the sport I loved and it's not a nice way to feel, but when I went home, it reminded me that I was also a person and I needed to look after Jada, outside of football.

“I’d forgotten how much it reenergised me and how much I loved camping with my family and going out bush,” she continued.

“I’d stopped doing it for so long, because of all the football that had come around and people talk about sacrifices, but you never realise what those sacrifices do to you, until you’re in a hard spot and you need them.

“Going back to Wagga, I reconnected with who I am, I found Jada again and she came back with more intention to push herself but also, knew when it was time to have a break and reconnect with Country.

“Being at home is definitely a spiritual thing. I remember walking along, or hobbling along on my crutches,” she laughed.

“I sat in some grass near the water and hearing the water go by and listening to the birds, it just felt peaceful. I felt right in the moment, I wasn't worrying about where I needed to be or what I needed to do and I think we struggle with that sometimes, to be able to just sit and be one with the land.”

Whyman’s grandfather, Hewitt, is from Wagga Wagga. One of 14 children, he is also part of the stolen generation. Jada credits her pop with her outlook on life and connection to Country.

“A lot of the things that have happened to him have really resonated with me,” she said.

“As part of the stolen generation and the Vietnam War, a lot of things were taken away from my pop.

“I couldn’t imagine the struggles that he went through, he is still such a strong man who continues to do so much good for his community,” Whyman continued.

“He’s dealt with anxiety and depression and the way that he manages it, is inspiring to me. He gets to know himself; he spends time camping and devotes so much time to his family.

“He sees that there's more out there than what's been said to him or his family, when they've been discriminated against in the most disgusting ways and still, he's managed to push and be better in his community and educate people.

“At the moment, he works with the army base in Wagga and is an elder for the current Aboriginal soldiers that are coming through. 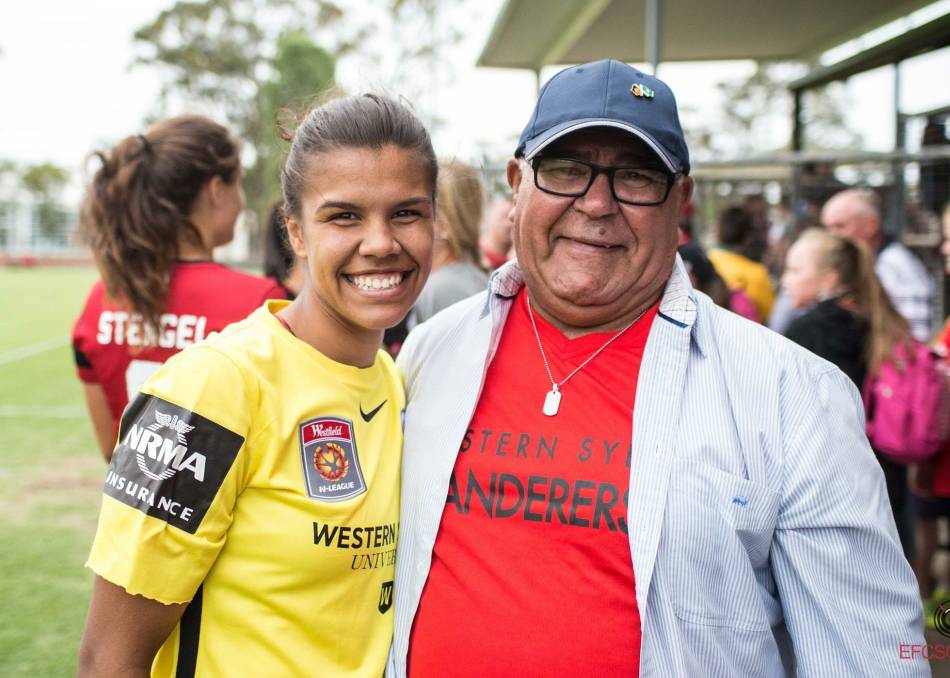 “It's amazing to see that even through his experiences and how much he's suffered, he manages to be able to talk about those things and pass it on to current and emerging Aboriginal soldiers.

“It's also what inspires me to do what I want to do with my sport. I can’t explain how much he does, and I think we forget how much strength that our elders have had, to still be the people they are and to continue to strive for a better country.”

Whyman says that to heal Country, there needs to be an acknowledgement of the intergenerational trauma that is still ongoing,

“I think people forget that the stolen generation only came to an end in the 1960s and still, it was only 10 years ago that my pop was able to reconnect with his sister after she was taken,” Whyman shared.

“People don’t realise that there are others who are still reuniting today and some who never will. My pop was lucky to reunite with his sister when he did, and they have such a strong bond.

“It really makes me appreciate the strength within our culture to be able to go through so much, yet, still be good people, look at the world in a really positive way and treat those around you the same way you want to be treated.

“For me, healing Country to heal our nation is acknowledging these things have happened and continuing to move forward to heal the hurt so many have experienced.”

She says that the best way to move forward towards healing Country together is to get involved, share experiences and be open to culture.

“Educate yourself, learn about the history and don’t be afraid to ask questions because we're still learning as well,” she said.

“As a culture, we're still reclaiming our own languages and our own land which will help educate others around us, on what we're feeling and what we're doing.

“We just want everyone to get amongst it and help out because our culture is very inviting.

We want to educate everyone around us, whether that be with storytelling, singing, dancing or painting, the main thing is to just get involved.”