Matildas at Home Preview: Blockbuster week of action in the A-League Women's competition

Amid a week of 'football frenzy', teams are still vying for a spot in the final series. Seven games of football over the space of a week will be a treat for football fans around the world.

Opening the week of football Newcastle Jets will be looking to bounce back after their 3-0 loss last week when they welcome reigning champions Melbourne Victory to McDonald Jones Stadium.

Newcastle last recorded a win against Victory back in the 2017/18 season and will be calling on experienced shot-stopper Claire Coelho in the host's goals to ensure this streak can be broken. 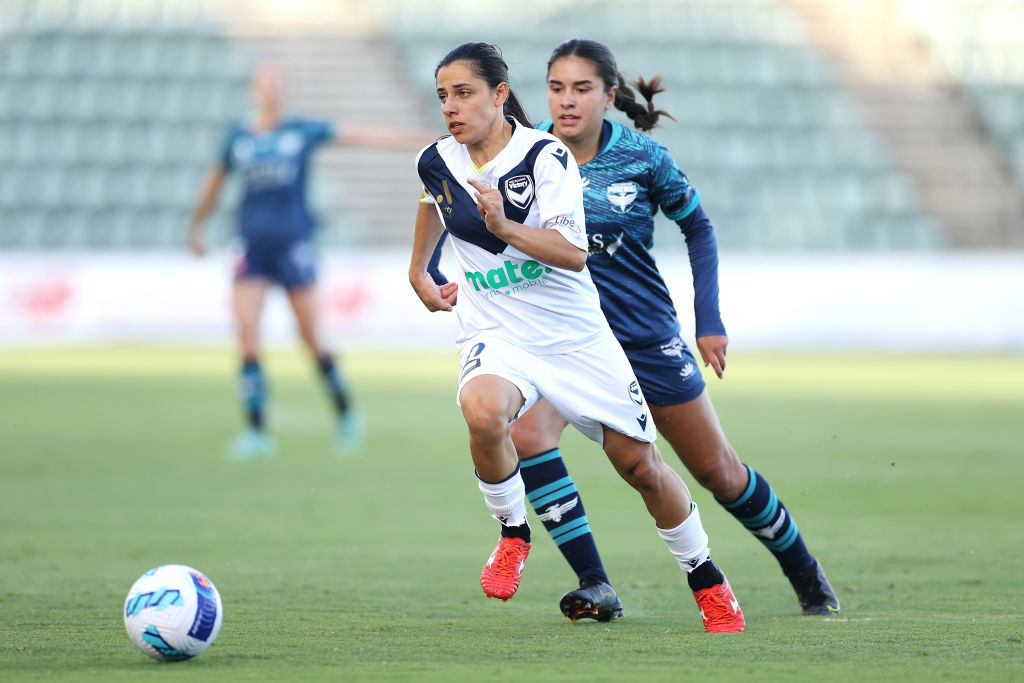 Jets will be without Tara Andrews, out due to COVID isolation, while Matildas duo Kyra Cooney-Cross and Courtney Nevin could make their return for the Victory.

In their absence Alex Chidiac has been pulling the strings in attack, picking up an assist in Melbourne's 2-0 win over Wellington.

Just down the F3, Perth Glory host Adelaide United in their home away from home at Central Coast Stadium. The sides sit in third and fifth on the table with this the second meeting of the sides this season.

The Reds took bragging rights last time out, beating Perth 4-2 on a New Year's Day clash. Adelaide will be hoping to repeat the dose and hold on to their spot on the table to qualify for their first final series in their history.

Adelaide go into the game on a three-game unbeaten streak, while Perth Glory dropped two points last weekend in a 3-3 draw with Canberra.

Over in Canberra, the two sides without a win so far in the season will be looking to clinch their first three points when Canberra host Wellington Phoneix in the nation's capital.

Fresh off a call-up to the Football Ferns squad for the SheBelieves Cup, Lily Alfeld will be hoping she can steer her Nix side towards a historic win.

Vicki Linton's Canberra side have had a memorable time at Viking Park but don't have a win to show for it, clinching two late draws against Brisbane and Perth.

Their attacking duo of Ashleigh Sykes, Allira Toby and Michelle Heyman will have to be in sync to help United seal their first win of the season.

READ: Matildas at Home: The kids are alright

Victory will play their second game of the week when they host Western Sydney Wanderers on Saturday.

Wanderers are coming off a 2-1 loss to the other side from Melbourne last week, with Bryleeh Henry picking up an assist on Western Sydney's only goal of the day.

Catherine Cannuli’s side has struggled for goals, only scoring three goals in their first nine games of the season.

Perth Glory will host Melbourne City at Central Coast Stadium on Sunday, with crucial points on the line for both sides. After being winless last season, Perth has turned their fortunes around this season, with four wins to show for their effort.

Melbourne City's front trio have had no problem finding the back of the net, scoring in every game this season apart from one.

Kiwi Hannah Wilkinson sits at the top of the golden boot ladder having scored nine goals so far. Linking up well with Holly McNamara who has two goals and three assists to her name.

City's defence will have their hands full, with American striker Cyera Hintzen finding the back of the net on two occasions in Perth's 3-3 draw against Canberra.

Brisbane Roar will be looking to get back to winning ways after back-to-back defeats when they host Adelaide United.

Roar's last outing saw them go down 2-0 to ladder leaders Sydney FC, with the side from Queensland in need of a win to climb out of 7th place.

Katrina Gorry has been a standout so far this season for Brisbane and will be called upon with Adelaide bolstering a cohesive midfield unit that has experience playing with one another.

A redemption for Roar's return to Moreton Daily Stadium will be needed after their last home game saw Brisbane concede a late goal to go down 2-1 to City.

The last game of a jam-packed week of football will see Newcastle Jets host Sydney FC, a repeat of Sydney's first game of the season and the last team they conceded a goal against in over 12 hours of football.

Ante Juric's side has had a record-breaking season, with Jada Whyman setting the record for most consecutive clean sheets and the whole Sky Blue outfit breaking the record for the longest time without conceding a goal.

Jets have been the only team this season to breach the hull of the Sydney defence, with Laura Johns taking the honours.

Remy Siemsen and Cortnee Vine are set for their return after their stint with the national team, and Juric will be hoping the duo can pick up right where they left off.

Jets experienced defenders Taren King, Cass Davis and Gema Simon will attempt to keep the ladder leaders quiet on Sunday night, however, Sydney has scored 28 goals so far this season and don't look to be slowing down.