Looking back: The Socceroos who started our qualifier v Honduras

Stadium Australia has been the host to some of the Socceroos greatest victories and biggest moments.

Matches such as the 2005 Uruguay play-off, the 2015 Asian Cup Final against Korea, and the late Josh Kenedy winner against Iraq to qualify for the 2014 World Cup all come to mind.

All these significant matches have two things on common: they were played at Stadium Australia, and they ended with victory to Australia.

In fact, in 12 competitive matches at Stadium Australia, the Socceroos have only lost a single match with ten wins and one draw. The solitary loss coming in a dead rubber against China where Australia had already qualified for the next round.

With the Socceroos due to play Japan at Stadium Australia in another crucial match on Thursday 24 March, we look at the last time the men’s national team played 90 minutes of competitive action in Homebush.

It was a winner-takes-all match against the fourth-placed CONCACAF team, with the first leg in Honduras being a 0-0 draw. A Mile Jedinak hat-trick (including two penalties) sealed the game for Australia with a 93rd minute consolation goal meaning the match ended 3-1.

While Jedinak has since retired – along with Tim Cahill and Mark Milligan – there are several players from that match who are in contention to play against Japan.

We take a look at how their careers have progressed in the five years since that famous night.

After controlling the left flank for the Socceroos against Honduras, Behich has had a wide selection of clubs between now and then.

Playing for Bursaspor in Turkey at the time, Behich only spent one more full season there before PSV Eindhoven paid a transfer fee for his services. 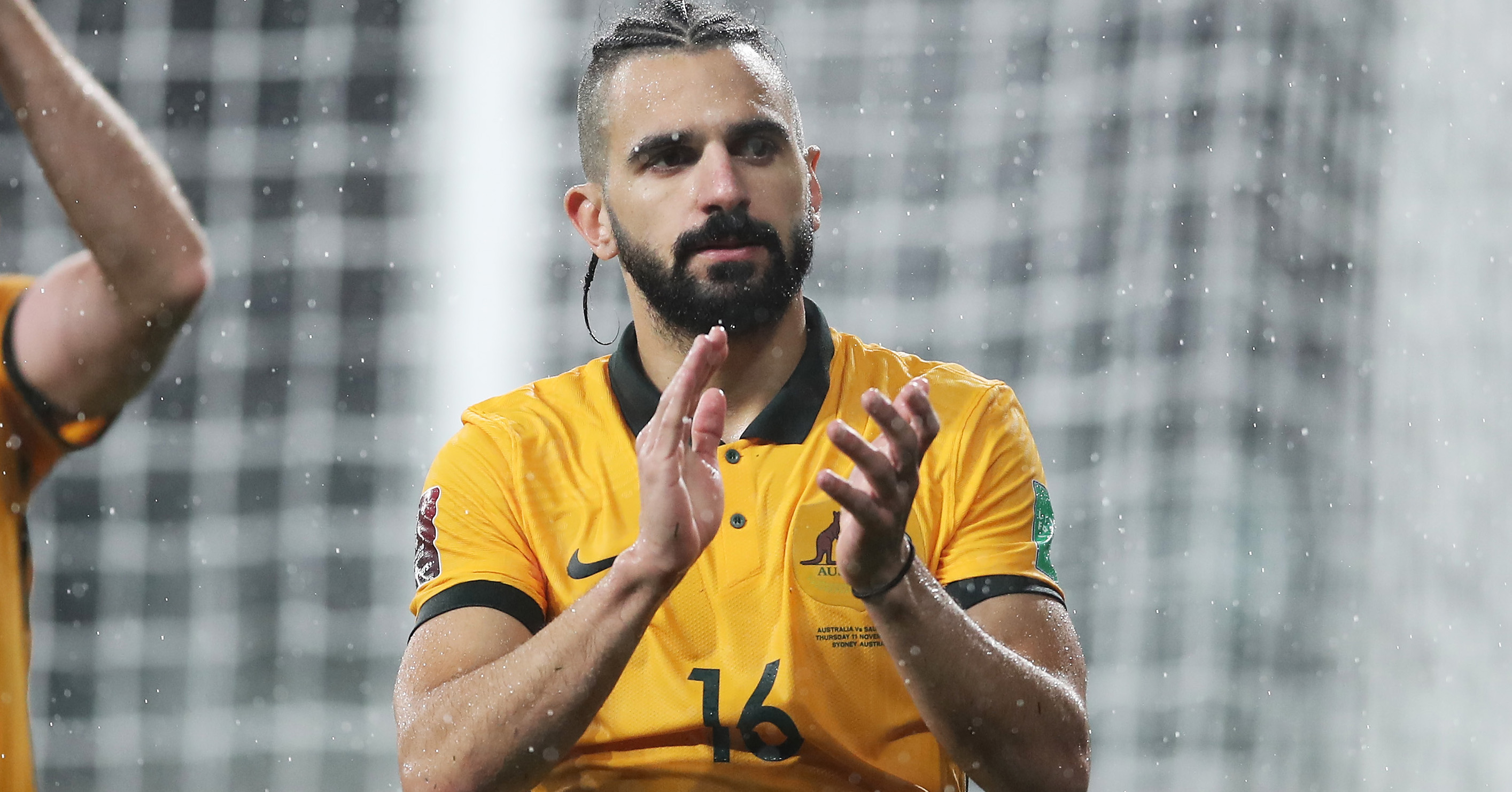 Behich briefly joined Socceroos teammate Trent Sainsbury in the Netherlands – but it was an ultimately unsuccessful move that saw the defender only play a handful of matches before returning to Turkey.

Playing for İstanbul Başakşehir and then Kayserispor – Behich proved that he is a force to be reckoned with in Turkey with consistent starts before moving to his current club, Giresunspor.

On the international stage, Behich has held his position as the starting left back with ease.

While playing his part in Australia’s victory over Honduras, Mathew Leckie had recently signed for Hertha Berlin. He would go on to have a fruitful few seasons in the German capital, before signing with defending A-League Men's champions Melbourne City for the current season - where he has been a constant goal and assist threat. 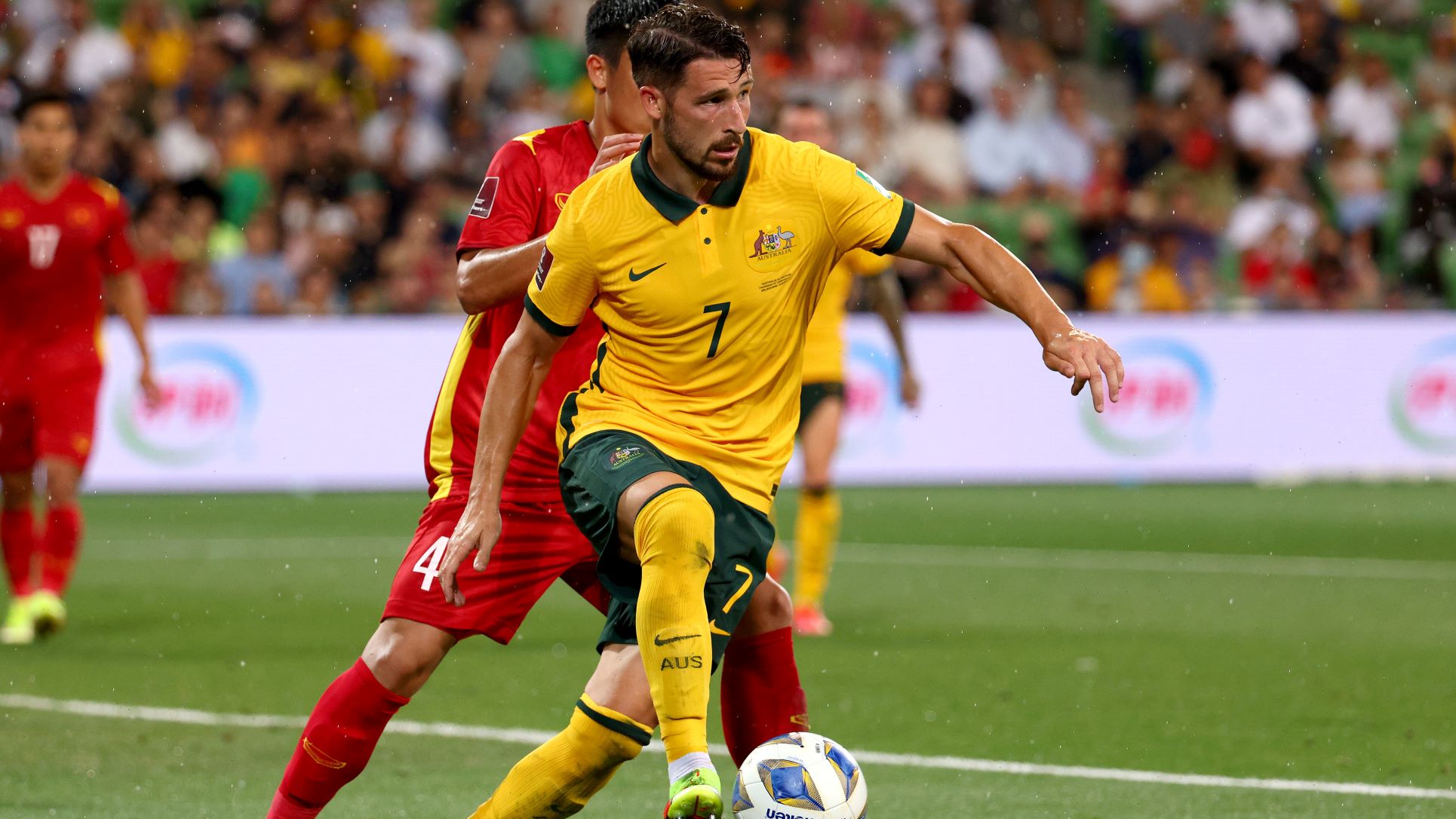 For the Socceroos, Leckie has remained a consistent starter. He played in all three group stage matches in Russia and both knockout round matches in the 2019 Asian Cup – though he missed the group stage fixtures.

Now a veteran for the national team, Leckie has spent time as the Socceroos captain and continues to deployed in the starting XI.

Aaron Mooy was flying high in the English top flight for Huddersfield in 2017. The ‘Pasty Pirlo’ was running the midfield for the Terriers in their inaugural Premier League campaign.

He remained in the Premier League for a number of years, staying with Huddersfield until their relegation in 2019 where he then joined Maty Ryan at Brighton & Hove Albion before a move to China saw him sign for Shanghai Port in 2020. 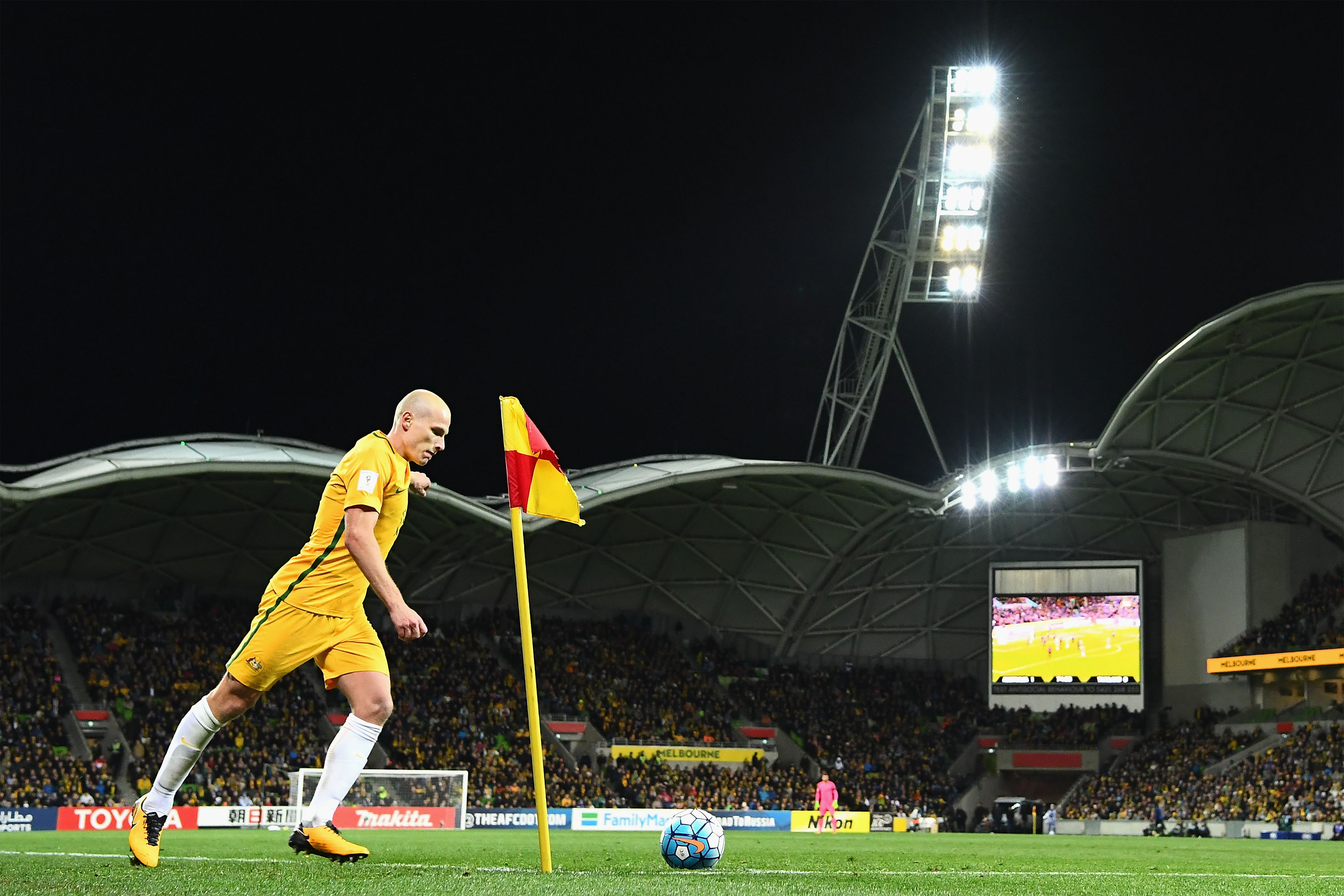 When available, Mooy has been an almost automatic selection in Australia’s best XI – but he has had a few periods of unavailability ranging from injury, to being stuck in China due to COVID-19.

Nevertheless, a fully-fit and available Mooy remains a key part of the Socceroos’ path to World Cup qualification.

Tom Rogic has not moved since the qualification match against Honduras, in fact he hasn’t moved for almost an entire decade: currently playing his ninth season with Celtic since joining the hoops in 2012. 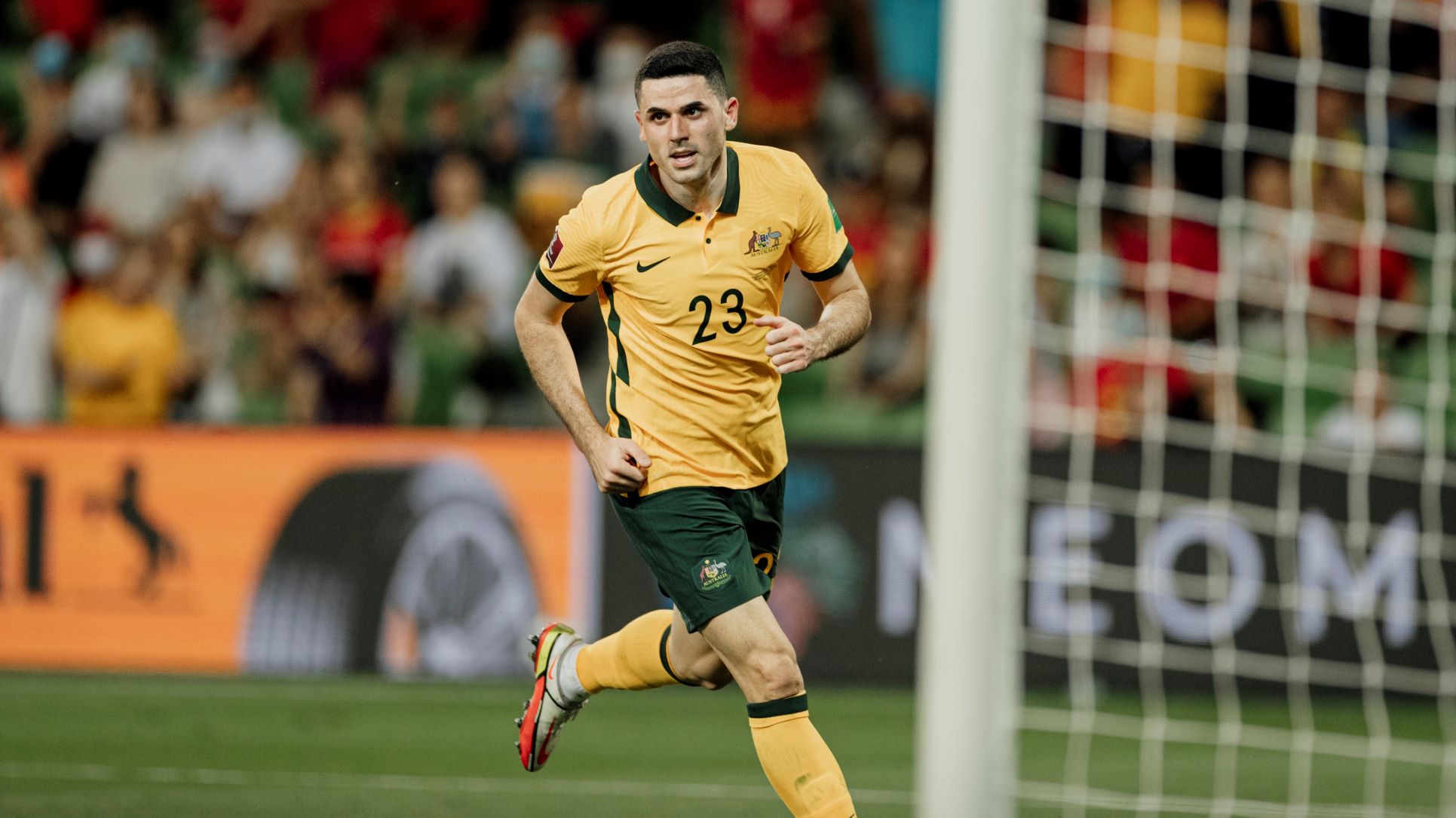 The midfielder has become a hero at Celtic Park, scoring key goals and playing big roles in the 15 trophies he has won with the Glasgow club.

On the international stage, Rogic has been a mainstay with the Socceroos – playing in all three group matches in Russia, all five Asian Cup matches in the UAE, and most recently winning man of the match honours in the Socceroos win against Vietnam in Melbourne.

At the time of the Honduras play-off, Ryan had recently joined English Premier League outfit, Brighton & Hove Albion on a five-year deal.

For the next three seasons, Ryan was the clear number one keeper for the Seagulls – playing almost every match and becoming a fan favourite – until he was usurped by future Spanish international, Robert Sánchez in 2020. 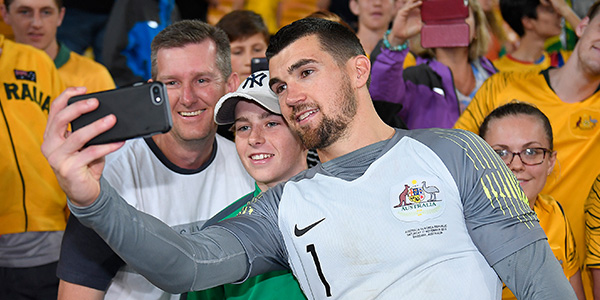 Seeking greener pastures, Ryan went on loan to Arsenal for the remainder of the season where he played in three league matches before signing with La Liga team, Real Sociedad for this season.

Internationally, Ryan has kept his spot as Australia’s number one. Following the Honduras match, Ryan went on to start in all three group stage matches in Russia, all five matches at the Asian Cup, and would be expected by fans to start between the sticks against Japan.

When Sainsbury entered the field against Honduras, he had recently completed a loan move at Inter Milan with another loan move to Grasshoppers in Switzerland just around the corner.

A terrific individual FIFA World Cup saw the centre back picked-up by PSV Eindhoven, in a move Sainsbury told the Aussies Abroad Podcast was one of the biggest regrets of his career.

Listen to the podcast in the player below, or subscribe and download it on Spotify, Apple Podcasts & Google Play.

After leaving the Netherlands, Sainsbury spent a season in Israel before landing in Belgium where he still plays for Kortrijk.

In terms of the Socceroos, Sainsbury has been a mainstay – playing in four of the five matches at the Asian Cup and surpassing 50 international caps for Australia.

CLICK HERE to buy your tickets for March 24's massive FIFA World Cup Qualifier - our first ever meeting with Japan at Stadium Australia.