Perth Glory’s Kristian Popovic has come off the bench to score an equaliser to deny Western United FC a win in their first-ever home match in a 1-1 draw in Geelong on Saturday.

Popovic – the son of Glory boss Tony – silenced the carnival atmosphere inside GMHBA Stadium with a clinical header not long after coming off the bench for the visitors.

United had looked on course for a second straight win when marquee man Panagiotis Kone thundered them into a 49th-minute lad with a sensational strike from outside the box.

Both sides pushed hard for a winner in the dying moments, with United’s Dylan Pierias almost becoming an instant hero with a shot that hit the crossbar late on.

It meant Mark Rudan’s side had to settle for a point in their first match in front of their home fans, while defending Premiers Perth have now started with back-to-back draws.

Glory were also forced to play the match in their training kit, after their playing kit was lost in transit from Perth.

WATCH: Meier off the mark as Wanderers snap Victory hoodoo with thrilling win
TRANSFERS: Every signing for Hyundai A-League 2019/20 Season

It was a helter-skelter start as the sense of occasion saw both sides eager to gain the early ascendancy.

Neil Kilkenny’s inviting cross almost found Bruno Fornaroli in the six yard box for what would have been an early lead for Glory, while Alessandro Diamanti was the man pulling the strings for the home side.

Connor Pain had United’s best chance after manufacturing a metre of space but his shot was well wide of the mark. 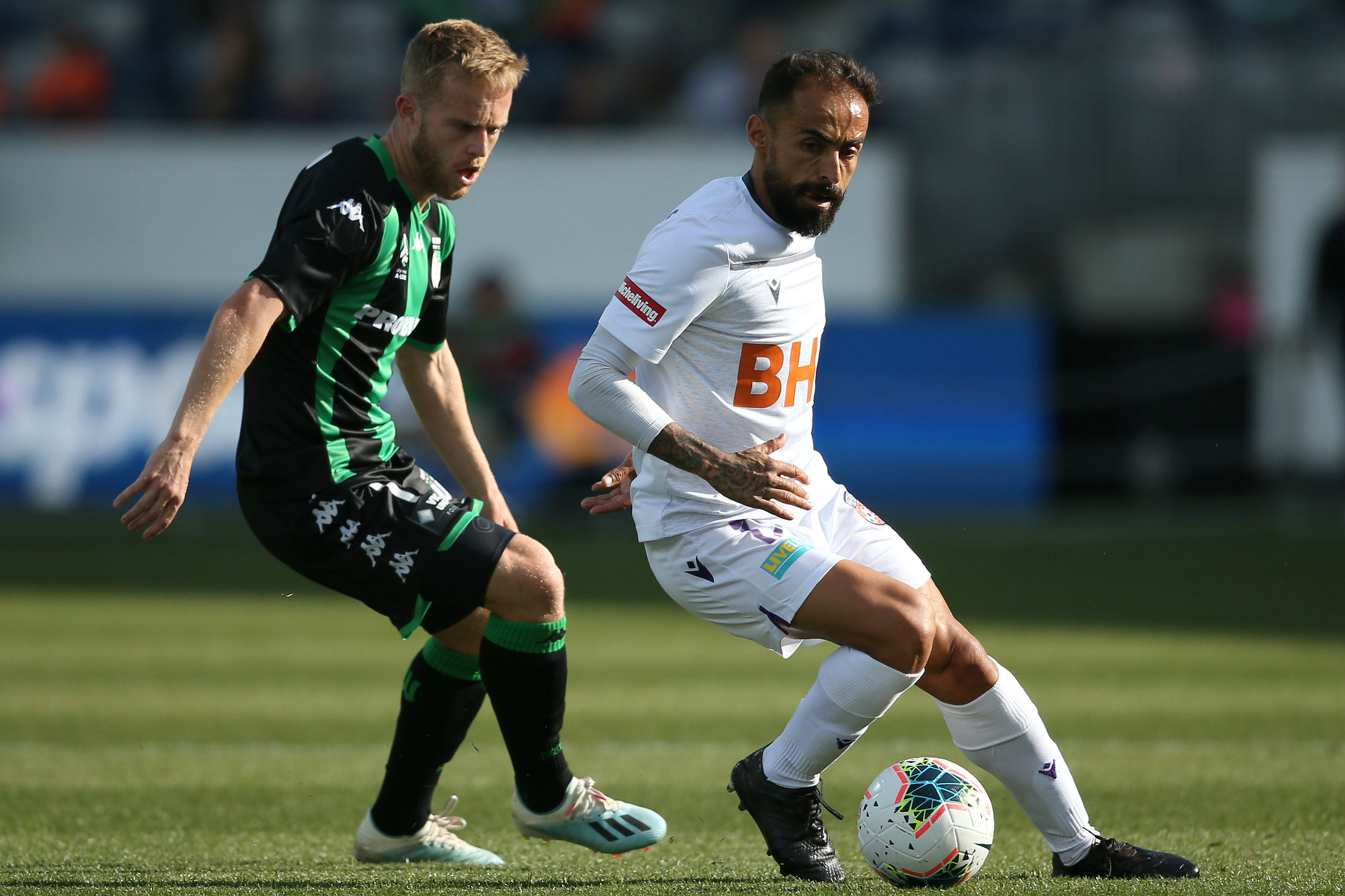 The visitors continued to dominate possession and it eventually the best opportunity of the first-half.

Chris Ikonomidis did brilliantly to dribble past a defender on the right, dinking a superb cross to the centre of the goal.

It was weighted perfectly for Fornaroli to meet it with a header but he planted it straight into the hands of keeper Filip Kurto.

It was the closest either side came to a goal in a cagey first 45 minutes.

United score their first-ever home goal in the Hyundai A-League, and it comes from the club’s inaugural signing.

Just four minutes after the break, Connor Pain did a great job to penetrate down the left, eventually passing to Kone at the top of the box.

The Greek international had no hesitation in taking on the strike, unleashing a powerful strike that blazed past Liam Reddy into the top corner.

The goal gave United a big lift and they began to take control of the contest.

First Alessandro Diamanti was inches away from finding the bottom corner with a thunderous strike from all of 35 yards out, with the fingertips of Liam Reddy denying the Italian star.

United did have the ball in the net on the hour mark from Besart Berisha’s header, but the goal was rightly ruled out for offside.

Glory did have their own moments and a close-range header from Kim Soo-Beom drew an excellent save from Filip Kurto, who parried the ball away to safety.

United gave Neil Kilkenny too much space around 30 yards out, allowing the midfielder to swing in an excellent cross.

And it was met by a superb header from substitute Kristian Popovic, the son of Glory boss Tony, to beat Kurto and get the visitors back on level terms.

Chances at both ends in frantic finish

Neither side wanted to settle for a point and pushed hard for a winner, forcing great saves out of the keepers at both ends.

First Fornaroli tried to curl in his first Glory goal, with his strike looking like it would bend into the far corner but for Kurto to dive and palm it away.

Just a couple of minutes later it was Reddy who had to bail out his side, somehow producing a strong right hand to deny Kone a second.

But the best chance came five minutes from time as United substitute Dylan Pierias sprung the offside trap and was clear through on Reddy’s goal.

The youngster went for a cheeky chip which beat the keeper but cannoned onto the crossbar and away.

Who was your man of the match?

Round 2: United v Glory man of the match