The Junior Matildas remain perfect at the AFC U-16 Women’s Championship Qualifiers in Vietnam, following a comfortable 8-0 win over Iraq.

Ante Juric’s side have won all three group matches so far and take on host nation Vietnam – who are also unbeaten - in their next match in a clash likely to decide who tops the group.

Only the group winners progress to next year’s AFC U-16 Championships meaning the Vietnam clash looms as the decisive fixture for the Young Aussies.

Against Iraq it took just 10 minutes for the Mini Matildas to hit the front, with Sofia Sakalis grabbing the opening goal.

It was the first of a hat-trick for Sakalis, who completed her treble before the break with goals on the half hour and three minutes before half-time.

Ashley Dribbus and Karly Roestbakken also scored in the first half as the Mini Matildas led 5-0 at the break, before second half strikes to Jacynta Galabadaarachchi, Molly Arens and Kyra Cooney-Cross completed the rout. 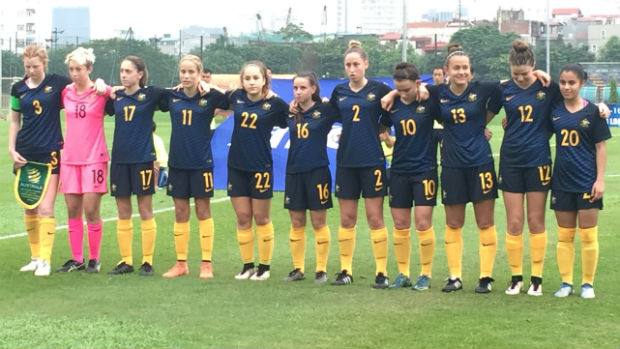 “This game vs Iraq was the most difficult to date, and the girls I’m pleased to say handled it very well and with great professionalism for a team so young and inexperienced at this level,” Juric said.

“The most pleasing aspect of the game was that the girls managed to keep focussed in a game that had an unprecedented amount of stoppages in play.

"To be able to re-focus and keep to our team processes and always be positive in our actions was a credit to the girls.

“We now look confidently forward to our game vs the host nation Vietnam.  This is a game that will ultimately decide who qualifies from this group to the AFC Championships, therefore a difficult task on a number of fronts, though one we are ready for and looking forward to immensely as a group.”

Following the Vietnam clash, the Junior Matildas finish the group stage against Uzbekistan.

If they manage to win Group D, they will join the likes of DPR Korea, Japan, Thailand and China at the 2017 Championships.