Australia's U-23 squad are on the verge of a major achievement when they head into Thursday morning's (AEDT) AFC U-23 Championship semi-final against Korea Republic.

If Graham Arnold's squad can emerge with a victory over Korea, they will not only advance to the tournament's final for the first time in our history but also punch their ticket to the 2020 Tokyo Olympic Games.

This squad, which plays their football at various clubs in the Hyundai A-League and abroad, have meshed together wonderfully under Arnold and his staff and have done a superb job to sit on the cusp of history.

Ahead of Thursday's massive clash against Korea Republic, we take a closer look at every member of the green and gold squad that have performed so brilliantly in Thailand.

The South African-born 21-year-old came through the youth ranks at Western Sydney Wanderers to emerge as a regular in the Hyundai A-League over the last two seasons. He is a composed and technically gifted player, who is equally comfortable in midfield or also as a right-back.

Born in the Netherlands, Bouman moved to Sydney at the age of four and spent his junior years playing with clubs like Manly United and Blacktown City. His family move back to the Netherlands in 2014 and he linked with the youth team at FC Groningen, working his way through the ranks. The attacking midfielder moved to second-tier Cambuur this season and has been in excellent form for the Eerste Divisie outfit.

Buhagiar began his professional career with his hometown club Central Coast Mariners in the Hyundai A-League, making 50 appearances and scoring four goals. The attacker is blessed with lightning speed - faster than Olympic legend Usain Bolt over 20 metres - and moved to Sydney FC last season but missed their entire Championship campaign due to a serious knee injury. Buhagiar has returned to the first team this season and scored his first goal for the club in the recent win over Brisbane Roar.

The 21-year-old right-back from Sydney came through the youth ranks at Marconi Stallions before going on to play with Western Sydney Wanderers in the National Youth League. He was signed by Italian Serie B side Virtus Entalla in 2015 and is currently on loan with Alessandria, who play in Italy's third tier.

Sydney-born D'Agostino got his big break when he signed a deal with Hyundai A-League outfit Brisbane Roar in 2015. He made 35 appearances for the club over four seasons, scoring three goals, before moving to Premiers Perth Glory for the 2019/20 Season. The attacker has a great scoring record for the Australian U-23's, netting four goals in four appearances including a match-winning double against Thailand in the Group Stage.

Deng's journey to professional football is a unique one having been born into a family of South Sudanese refugees in Kenya, feeling the conflict in his country and settling in Adelaide. The 22-year-old central defender has already played for the Socceroos and is a mainstay of the Melbourne Victory defence, helping the club win the Championship in the 2017/18 Season.

It's been something of a meteoric rise for the 19-year-old midfielder who hadn't even made his professional debut with Brisbane Roar at this time last year. He broke into Roar's Hyundai A-League side at the end of 2018/19, making four appearances and earned a move to Danish side AGF alongside fellow Aussies Mustafa Amini and Alex Gersbach. And Duncan has broken his way into the first team at high-flying AGF, making 14 appearances for the first team, which is currently in third spot on the ladder.

Of Nigerian decent, Folami was born in Sydney but Ipswich Town's academy in 2015, having previously played for the Football NSW Institute and Sutherland Sharks at youth level. A pacy and lethal striker, the 20-year-old has worked his way through the youth levels at Portman Road and has made four first-team appearances, with his debut coming in an EFL Cup match against EPL side Crystal Palace in 2017. Folami has recovered from an Achilles tendon injury last year to work his way back to Ipswich’s U-23 side, scoring some spectacular goals along the way.

Still just 20, Genreau won his spot in Graham Arnold's squad for a number of eye-catching displays in the Hyundai A-League with Melbourne City. The classy attacking midfielder, who was born in Paris, France, made his Hyundai A-League debut as a 17-year-old and last season spent a campaign on-loan at Eredivisie club PEC Zwolle. While he has been included in a couple of Socceroos camps, he has yet to make his senior international debut but it surely won't be long if he continues his incredible development.

One of the more experienced members of Arnold’s squad, Gersbach has been jet-setting around Europe since he flew the nest of his native Sutherland. The 22-year-old made his Hyundai A-League debut at the age of 17 and went on to make 32 appearances in two seasons for Sydney FC. Over the past five years, Gersbach has played in Norway – where he collected three title winners medals with Rosenborg – France and the Netherlands. After earning six senior caps, he now turns out for AGF, alongside Socceroos teammate Mustafa Amini, in Denmark.

It’s not everyday a club like Tottenham Hotspurs come calling but that was the case for the Sydney-born gloveman in 2014, when just 16 years old. Glover joined Spurs’ Academy and played for their U-18 and U-21 teams in ensuing seasons, before spending stints on loan at Central Coast Mariners and Helsingborg in Sweden. Glover, now 22, was released by Tottenham at the end of last season and joined City, where he has become the club’s first-choice shot-stopper before the AFC U-23 Championship.

Holmes played junior football for Rockdale City and Sydney United bfore getting his big break in 2013 when he was signed by English side AFC Bournemouth. That was enough to convince Holmes - A NSW state representative in baseball also -  that his future lied in football. He joined Ebbsfleet United at the start of 2019/20 and has been their first-choice all campaign, saving two penalties  this season.

Perth-born Italiano come through the FFA Centre of Excellence before signing with Perth Glory in 2017. He made his debut as a 16-year-old, making 19 appearances for the Hyundai A-League club before getting snapped up by German Bundesliga side Borussia Monchengladbach. Italiano – a skilful attacking midfielder - is playing for the club’s reserve team this season and has already scored a couple of goals. At just 18, he is one of the youngest members of Graham Arnold’s squad in Thailand.

The 22-year-old keeper was a late addition to the squad, replacing the injured Thomas Heward-Belle. Born in South Australia, Margush has played all his Hyundai A-League football with the Reds, making a handful of first-team appearances since signing a professional contract in 2016.

After making his Hyundai A-League debut in January 2018 after four years in the Melbourne City youth set-up, Metcalfe has established himself as a key component in City’s midfielder over the past two years and has represented the Young Socceroos. The 20-year-old Newcastle-native, who moved to Melbourne with his father’s job aged 13, only made six appearances in his first two senior seasons for City, but broke into head coach Erick Mombaerts’ plans this off-season and has started seven times in 2019/20.

Towering centre-half Mourdoukoutas has made 15 Hyundai A-League appearances for Western Sydney Wanderers since breaking into the senior set-up two years ago. The 20-year-old, who played for Sydney Olympic in the National Premier Leagues as a teenager before joining Wanderers, lifted the Foxtel Y-League title with the Red and Black’s youth team in 2017/18.

'One of the most talented youngsters in the country’, as described by Melbourne City head of football, Michael Petrillo, Najjarine has made 17 senior appearances for City since making the move to Victoria. A product of the Football NSW institute and a Western Sydney Wanderers youth product, the silky skilled winger of Lebanese decent scored his first Hyundai A-League goal in a 5-0 drubbing of Central Coast Mariners in April 2019.

Brisbane-born O’Neill moved to England as a teenager desperate to pursue a football career and it paid off big time as he was signed by then-Championship side Burnley in 2014. A couple of years later Burnley were in the EPL and O’Neill – an all-action midfielder – was making his senior debut off the bench in a 2-0 win over Liverpool. Still on the books of Burnley but looking for first-team experience, the now 21-year-old has been out on loan over the last few seasons, playing for the likes of Oldham Athletic, Fleetwood Town, Central Coast Mariners and this season Brisbane Roar.

An attack-minded left-back, O’Toole has made a name for himself in the Hyundai A-League over the last couple of years at Brisbane Roar. With a Japanese mother, O’Toole played youth football in Japan for three years before returning to Australia and spending one season in Adelaide before he was picked up by Roar. His breakthrough season come under John Aloisi in 2017/18, where he made 14 appearances before signing a new long-term deal with the club.

Piscopo’s talent was recognised from an early age, recruited by Italian Serie A giants Inter Milan in 2011. The fleet-footed attacker spent six seasons in the youth team at Inter before a short stint at Torino. But a move to Serie C outfit Renate was where Piscopo’s talent shone and in two seasons with the club he scored five goals in 51 senior games. The 21-year-old then made a move to the Hyundai A-League at the start of the 2019/20 Season, joining Wellington Phoenix on a three-year deal. He has chipped in with a couple of goals and was December’s nominee for the Young Footballer of the Year. Piscopo has also scored two goals in Australia’s run to the last four at the AFC U-23 Championship.

It’s been a meteoric rise in recent years for the Bulli-raised defender. After attending a youth tournament in Manchester with the Football NSW Institute of Sport in 2015, Liverpool scouts offered the then 15-year-old a one year contract with their U-18 side. Ryan spent one season with the Reds Academy before he was picked up by Eredivisie side Willem II on a three-year deal.

Adelaide United boss Gertjan Verbeek plucked Guinea-born striker Toure from the NPL in South Australia midway through 2019 and he’s quickly proven to be a sensation. He starred in the Reds’ march to their FFA Cup triumph, scoring and producing a man-of-the-match display in the final rout of Melbourne City. The 19-year-old’s outstanding form prompted Graham Arnold to give him a call-up to Australia’s U-23 squad and it was Toure’s extra-time goal which secured the win over Syria in the quarter-finals. 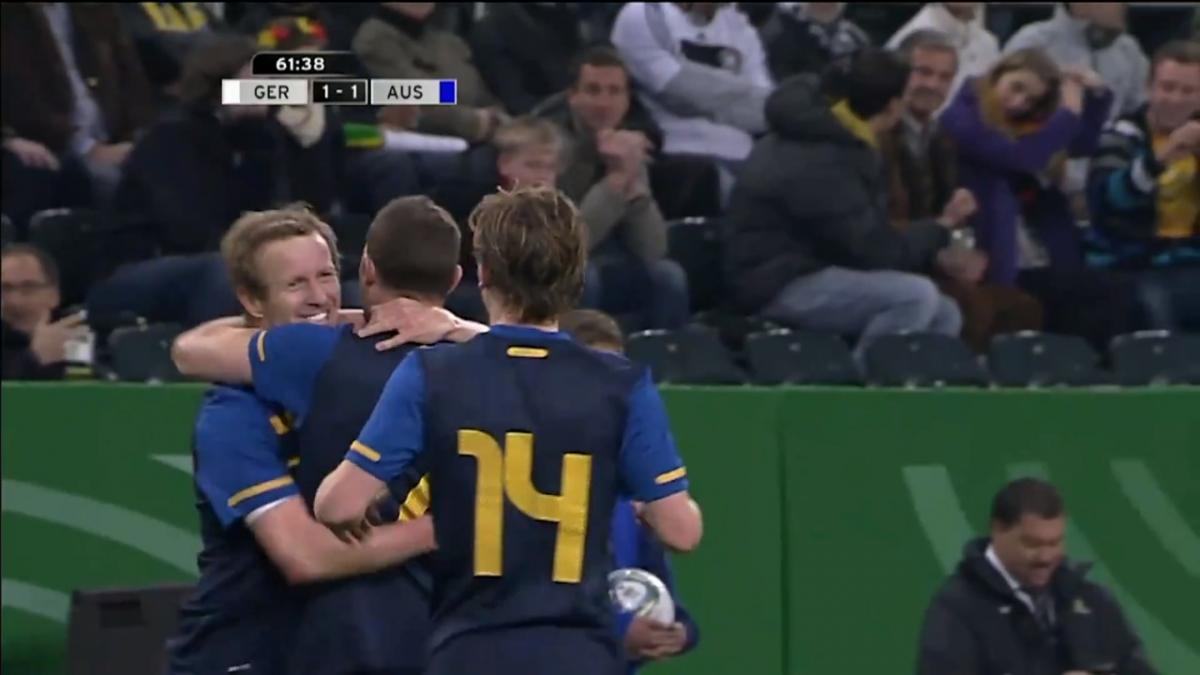