In collaboration with Opta, our new series takes a look at the stats behind the evolution of our Westfield Matildas stars over the past couple of years.  First up is our captain, and goalscoring machine, Sam Kerr.

The trajectory of Samantha Kerr’s football career has been a highlight of the Australian sporting landscape over the last few years and her emergence as one of the most prolific international footballers in the history of the country is but one arc in an already illustrious story.

A tally of 42 international goals makes her the second-most prolific goal scorer in Westfield Matildas’ history behind only Lisa De Vanna. It did not all come straight away for the now-household name, though.

Sam Kerr scored her maiden goal for the Westfield Matildas in the 2010 AFC Women's Asian Cup against Korea Republic.  While the goal wasn't iconic, we caught a look at the celebration that a decade on would become iconic.

Kerr then scored seven goals across her first seven years in the Australian squad – including her first ever brace against Vietnam in 2015. The five-year period since she has made her presence felt on the international stage have seen an explosion of goals recording 35 goals from 2016 - 2020.

We breakdown Sam Kerr’s impressive burst of goal-scoring form on the international stage since June 2016.

She’s been able to beat opposition goal keepers diving in either direction, though, with an even spread across the left, centre, and right quadrant of the goalmouth.

There is never any time to take the foot off the pedal when defending against Sam Kerr, she’s shown that she’s happy scoring from any minute from the first to injury time.

Early on is where she’s proven the most effective in her recent international exploits, however. Kerr has scored nine goals within the opening 15 minutes of games since the beginning of 2016 – more than she has scored in any other 15 minutes period and exactly half of her first-half total in that stretch.

Her next most prolific timeframe is the most crucial – the game’s dying moments. She’s scored seven goals in the 76th minute or later – in fact, all seven of those goals have come in the 81st  minute or later, while no other Westfield Matildas player has scored more than three goals in this sector. 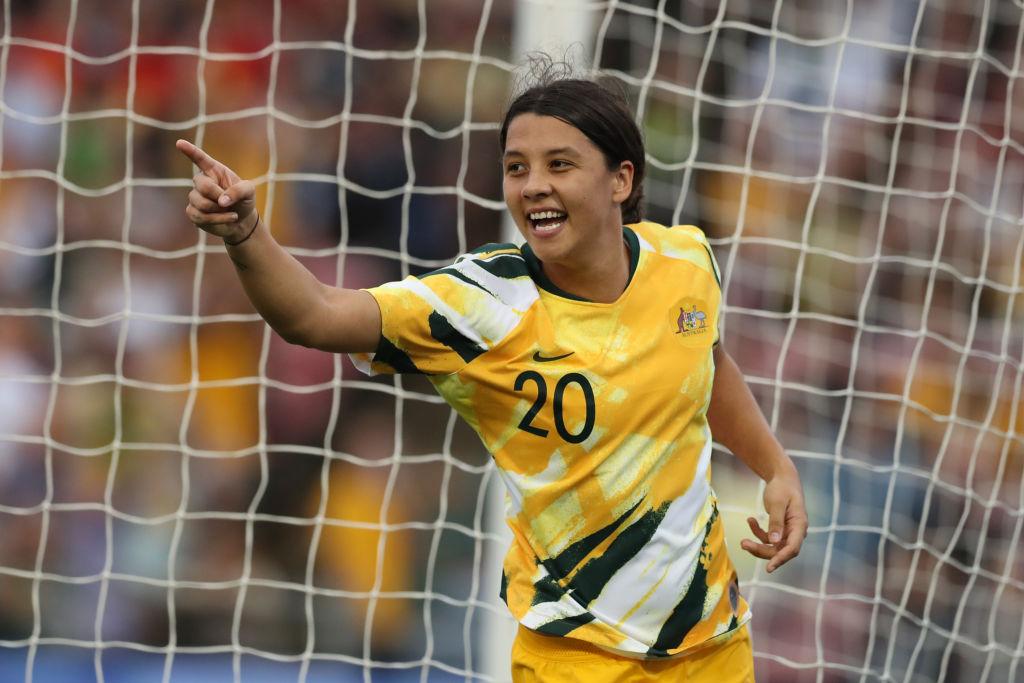 She’s mastered all methods as well, leading the Westfield Matildas in goals via the right boot (18), left boot (10) and head (7) since the beginning of 2016. In fact, Caitlin Foord is the only other Australian to have scored four or more goals via each of her left and right boots in that time (11 via right foot, 4 via left foot).

Kerr’s lethality has come primarily from within the 18-yard box, where 32 of her 35 goals for the Westfield Matildas since the beginning of 2016 have been scored (including two penalty strikes).

Of her three successes from outside the box, two have been against China – both from more than 28 yards from the goalmouth.

The average Sam Kerr goal is struck from 12 yards out from her opposing goalkeeper, while her closest strike came from just 2.4 yards away from Argentinian shot-stopper Vanina Correa in March of 2019 when they met in the Cup of Nations.

Sam Kerr wouldn’t be where she is today without the support of an array of similarly exciting players in the Westfield Matildas system.

She’s struck up successful partnerships with plenty of players at domestic level, but Westfield Matildas’ duo and good friends Caitlin Foord and Emily van Egmond – who have each provided four assists for Kerr since the beginning of 2016 – are the most successful at linking up with Kerr.  Not surprising considering that the trio have been playing alongside each other since their Junior Matildas days.

Alanna Kennedy (3) has also been integral to the successes of Kerr across that period, while a total of 12 different players have provided at least one assist for Sam Kerr in that time.

The pace and consistency of Sam Kerr’s goal-scoring antics across the last five years have been the headline of Australia’s international football exploits and she has time on her side as she hurtles towards the 50-goal mark for the Matildas – a feat no player has yet reached.